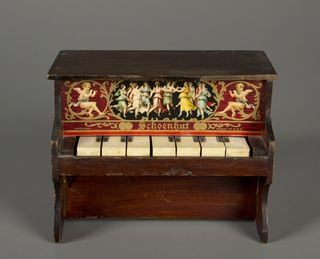 Throughout my childhood, I proved a fickle piano player—I’d eagerly start taking lessons, then denounce sheet music and hide the metronome, only to begin lessons with a new instructor a year or two later. I was not without musical ambitions—I screeched along with Janis Joplin and I joined summer musicals. When it came to playing the piano, perhaps my lack of dexterity and rhythm stemmed from never playing with A. Schoenhut Company toy piano.

Born into a family of toy makers in Wurtenberg, Germany, Albert Schoenhut learned to make toy pianos at a young age. John Dahl, a buyer for the American department store Wanamaker’s, heard of Schoenhut’s talent and invited the then 17-year-old to Philadelphia to work as a repairman for toy pianos imported from Germany.  Schoenhut kept busy—the hammers in early toy pianos struck glass plates and these fragile components were often damaged during shipment.

By 1872, Schoenhut redesigned toy pianos by replacing the glass parts with durable steel plates. When a player struck the key of a newly designed piano, he was greeted with a metallic tone that remains popular with contemporary musicians. In hopes of providing a training tool for children and to advance their musical capabilities, Schoenhut formed the Schoenhut Piano Company.

Schoenhut offered pianos for “every purse and taste.” Models ranged from six keys to three octaves and several even featured raised black keys for the full chromatic scale. Individuals who purchased a Schoenhut toy piano also received a basic instruction manual and sheet music. The Strong’s collections include several of Schoenhut’s toy pianos. I especially like the elaborate 1890 wooden, spinet-style piano. The small, square piano features full-width keys and the notes are tuned to accurate pitches. From David Grisman and Jerry Garcia to They Might Be Giants, many musicians demonstrate how playing music is fun.  If you’re interested in learning a new instrument, why not tinker around with a toy version first?