Chinese authorities
are reportedly considering
lifting a 12-year ban on the manufacture, sale and import of game consoles and it is certainly good news for console makers. Sony's shares surged by 5% as a result, while news channels quickly rushed to cover the story. If the console ban is indeed lifted in China, it could potentially
rescue the category, making a great impact that would be felt on a global scale.

Global sales of static video games consoles have been in a steady decline since 2008, as consumers await the next generation while category embraces the full impacts of the end of its life cycle. So, could China be the saviour of the category and become the world's biggest console market as it is in other consumer markets? 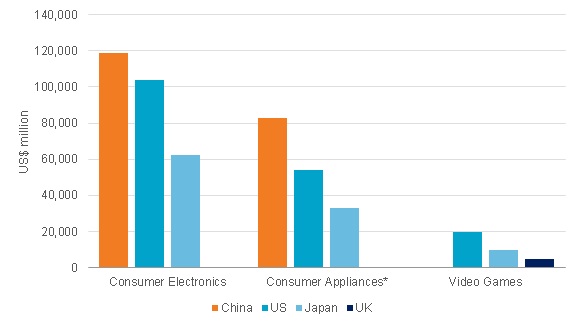 In consumer appliances,
China is by far the world's largest market, with US$84 billion – almost as much as the second (the US) and third (Japan) ranked countries
combined, accounting for 23% of global value sales in 2012.

China
also dominates in
consumer electronics, with sales of
US$114.5 billion,
23% of global sales in
2011. This is
some
US$20 billion higher than the US, the world's second largest market.

In static video games consoles,
however, it is a completely
different story. Due to the ban, value sales of static consoles
remained at just US$2 million in China in 2011, making it one of the smallest markets in the world. This compares
to the fact that value sales for the category in the US and
Japan
exceeded
US$4.1 billion and US$1 billion, respectively, in the same year.

The most popular video game consoles globally
are Nintendo's
Wii and DS, Sony's PlayStation 3 and PSP, and Microsoft Corp's Xbox 360. Collectively, these are known as the "seventh generation" systems, reflecting their technological advancements compared with the previous sixth generation systems. Global value sales of static consoles dropped by around 8% in 2009 and 2010, with a further decline
of 6% in 2011.

Sony's PlayStation 4, which has a built-in sensor as the pad doubles as a motion device, tracked by a new Kinect-like stereo camera, release announcement on 20th February came as a relief to many which could potentially shift the global static video game console sales upward. However, since the new console is "coming holiday 2013" as it was stated by Sony, it is likely to go on sale in at least some countries in or around December. As a result, there is no positive impacts are expected on the overall category
in the very short term. As the cycle of seventh
generation consoles wanes, sales of video game hardware and software have followed suit. In some markets, such as the US, the hardware
market is also impacted by the high level of market penetration for consoles, with many consumers already owning more than one brand of console in the home. Manufacturers have also dropped the unit prices of consoles to move products out of warehouses and create interest, as many consumers seem content to wait for eighth generation consoles.

Since the year 2000, the Ministry
of Culture has imposed tough restrictions on the sale of video game consoles. These restrictions mean that consoles like the Wii, PS3 and Xbox 360 and related games and accessories
are officially banned in China. In reality, however, there are millions of black market consoles in the country, and the motion- controlled
Kinect system is openly on sale, although Microsoft claims that "it's not used for gaming but for other purposes such as medical treatment and education". It should also be noted that even if Kinect is used as what it is designed for, there is a major hindrance
to its sales growth in the country: Chinese households. Many consumers purchased the product only to find out that their living rooms were just too small for its censors to work fully.

Lifting
the ban would certainly have a huge impact on global sales of static game consoles,
thanks to China's immense potential, with almost non-existent sales for the category at present. However, sources in the country rightly point out that the move requires the approval of seven ministries, as it was originally imposed by them. Therefore, it is pretty much clear to all that it will not be a straightforward and easy process, given the necessary involvement of all parties, and significant bureaucratic obstacles to overcome on the way.

It would surely be quite far-fetched to say that the survival of consoles no longer depends on the seventh generation; as a cyclical
industry, new launches are – and have always been – crucial for its revival. However,
a serious lift for sales, which the category badly needs, may not be too far away.