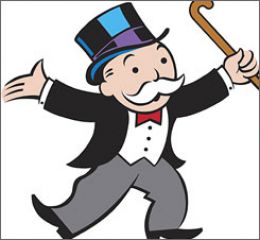 Those
who create and market play have long been considered architects of the softer
side of life.   They are also, however,
the leading edge of the capitalist system.  At least that’s what occurred to me as I read
an interesting piece in the New York
Times, entitled “In History Departments, It’s up With
Capitalism.”  Written by Jennifer
Schuessler, the article notes that those who run economies (“the bosses,
bankers and brokers”) are once again the subject of intense study.

As I read the article, I
began to think about those characters and those with character who built the
American toy and later play industry into the multi-billion dollar industry
it is.  Their use of democracy’s powerful
private and intellectual property protections with capitalism’s open door to
entrepreneurs created multi-millionaires and paupers.

It takes, however, more than
just an idea and good fortune to be more than a one hit wonder.  It takes enormous business acumen, an ability
to manage assets as well as people and the rare ability to keep up with
society’s rapid changes in taste.

Just look at the legends,
Louis B. Marx, Louis Marx and Company; Ruth and Elliott Handler, Mattel;
Charles Lazarus, Toys R Us; Betty James, Slinky
and the Hassenfelds (Henry, Merrill, Stephen and Alan), Hasbro and you
get a sense of  what happens when
individuals have both the requisite genius of
great merchant and great businessperson.

As I finished the article,
the question that occurred to me was:  “Why
do the toy and play industries exist?  Is
it to bring joy to children and adults or is it to build a business and
maintain it?”  Is one the product and the
other a by-product?  In fact, does it
even matter?  What do you think?