On the way to my office, I pass through a public area of the National Museum of Play at The Strong that staff affectionately refers to as the “valley of the dolls.” The floor to ceiling exhibit cases feature an array of beautiful dolls. A display of Lenci dolls, ranging from 7 to 30 inches tall and dressed in exquisite outfits of intricately pieced felt patterns, always captures my attention. Lenci dolls also caught the eye of an American businessman visiting Turin, Italy, in 1919. 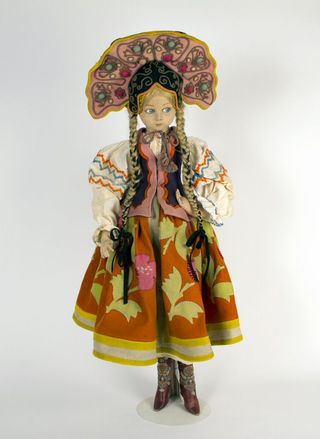 While at a party, the businessman met Enrico and Elena Konig Scavini. The couple had crafted high-quality dolls of pressed felt with oil-painted faces and elaborately decorated outfits. Elena Scavini’s own childhood doll inspired her creations. First working on her dolls in war-torn Italy of 1917, she recalled happier days of growing up in Austria. As a child, she favored a simple doll made of wood and rags over a beautiful porcelain doll. Of the handmade dolls, Elena Scavini remembered: “My doll was nothing, and therefore she could become everything. She was different every time I held her in my arms.” Impressed by the Scavinis’ artistic dolls, the businessman purchased all of them. On his way back to America, the man showed off his new merchandise to fellow passengers, and he reportedly sold every doll before reaching port. Upon arriving in New York, he placed an order for more Lenci dolls, and the Scavinis officially set-up shop.

In the 1920s, the company made boudoir dolls, character dolls, and dolls representing children. The children often sported faces of pensive or pouty expressions, looks of surprise or astonishment, or the side-glancing gaze of sly coquette. The long-limbed parlor or boudoir dolls wore lavish outfits with lace, ribbons, and ruffles. Exotic and a bit campy, most of these dolls also wore heavy make-up and bore a sultry look. Fashionable and wealthy Americans purchased the dolls for decorative purposes, displaying
them in their bedrooms, parlors, and living rooms.

In the 1930s, Enrico passed away and Elena sold Lenci to the Garella family. The company offered a new series of small, wide-eyed Lenci dolls. Many Lenci consumers hung the dolls by felt loops from the interior of their automobiles. During World War II, the Lenci used their doll-making supplies to manufacture blankets and pajamas for field hospitals, but the company continued to make a few, select dolls. The lack of quality supplies detracted from the status of the dolls. By the late 70s, Lenci manufactured the dolls in the traditional manner. The Garella family continued creating Lenci dolls until 2002. The Strong’s Brian Sutton Smith Library and Archives of Play holds original Lenci catalogs from 1925, 1927, and 1930. The catalogs remind me of a contemporary Vogue of Vanity Fair—the pages filled with beautiful figures set against carefully crafted backdrops.