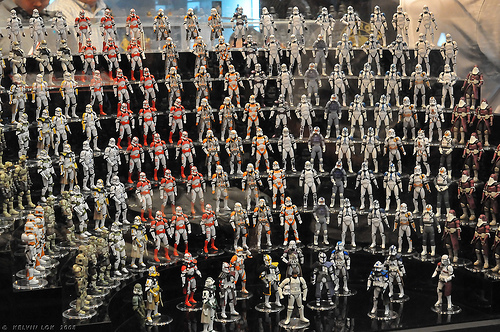 Concurrent lines under a single brand banner are hardly new or
surprising. Taking Star Wars as example, Hasbro has rarely supported the brand
with a single product line. In 2010 Hasbro released Galactic Force for
preschoolers; The Clone Wars targeting kids ages 6-12; and The Vintage
Collection for collectors. Lego also had their own line of Star Wars vehicles
and environment playsets. This method of market segmentation, deployed on
virtually every major boys brand, has allowed manufacturers to target their
channel marketing dollars.

But today, as sales continue to slide in the action figure
aisle, the targeted approach has given way to a maelstrom of similar but
slightly different products. Mattel and Hasbro have resorted to throwing
everything they have at the wall to see what sticks. In keeping with the Star
Wars example, Hasbro’s 2013 Toy Fair showroom had a plethora of offerings:

While Hasbro holds the Star Wars master toy license with
LucasFilm, they are far from alone in the space. Lego and various other
manufacturers also stock toy aisle shelves with a barrage of products aimed at
the same audience. I’m picking on Hasbro, who duplicate their “stick to the
wall” approach on Iron Man, Spider-Man, Marvel, and Transformers, but Mattel is
just as guilty. Despite decades of success at Kenner and Hasbro, Mattel can’t
seem to find an approach that works for their Warner Bros. / DC Comics Batman
license. It should be no surprise that Batman toys spent nearly two decades as
one of the top-selling action figure brands. Since Mattel took over the
license, Warner Bros. has positioned their comic hero as a significantly darker
and more adult property (Christopher Nolan’s The Dark Knight trilogy acting as
cornerstone), which has made exploitation in the toy space difficult. Amidst
the announcement of a new Beware The Batman animated series, Mattel has
redoubled their efforts with the Toy Fair announcement of various segments
including: 1960s-style Adam West Batman (dolls and action figures); 6-inch
collector-targeted Batman and DC Signature Series; an evergreen 5-inch scale
called merely “Batman”; a 3-inch scale continuation of the movie line; and
Fisher-Price’s Imaginext products – among others!

Are today’s toy marketers unable to segment the market and
produce targeted products appealing to the customer and user? Have focus
testing, metrics analysis, and test scenarios completely failed us? The “throw
everything at the wall and see what sticks” approach is particularly ill-fated
in the action figure category, where manufacturers have struggled in recent
years to confirm substantive interest in the market. Lego and other construction
toys have usurped interest from mom and child. Legos provide better play value
for the customer’s dollar. I question whether just another size or look for
action figures will reverse the deteriorating sales and interest. Instead, I
expect the “clones” to generate even more market fatigue from moms who can’t
discern value from her choices, and children who can’t find a toy that offers
deep play value.

It’s time to reflect on past successes and assess the future
viability of a category that has only been around since the late 1970s.
Hasbro’s Playskool Heroes and Mattel’s ImagiNext are faring much better than
other offerings, perhaps due to innovative mechanisms that facilitate
adventurous play (such as Spider-Man’s web racer). Just a few meters over in
the same retail aisle, Hasbro’s Beyblade and Fighter Pods add kinetic gameplay
to the collectable play pattern. These innovations make products stand out on
the shelf amidst all the clones. If manufacturers are anxious to exploit their
expensive entertainment licenses, maybe they should pursue innovative designs
that bring more than collectability and structured imaginative play to the
table. Throw out all the clones and start making products that excite kids and
moms.

In his roles as Strategy Director of Entertainment Brands at Manifest Digital, Co-Founder at toy invention studio Otherdoor Entertainment, and ChiTAG committee member, Brian Torney is an innovator in the play industries, kids entertainment, and product/brand initiatives. Refusing to grow up, Brian has been contributing to the play industries since the age of 15, when he worked at a Chicagoland Toys R Us store. Brian spearheads ground-breaking creative and interactive projects for industry-leading entertainment and toy companies including Cartoon Network, Fox, Nickelodeon, Step2, The Marketing Store, McDonald’s, THQ and Hasbro. He specializes in cross-platform brand storytelling. Brian also practices ancient Jedi techniques of mind control… These are not the droids you’re looking for.