Earlier
this week I attended the International Home and Housewares Show, the huge
annual trade show of 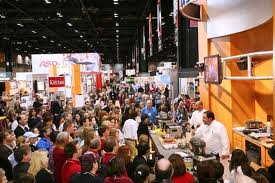 the kitchen gadget, tableware, small appliance and
cookware industries. I was curious to see the show since it had been many years
since I had last attended. It had definitely grown to over 2,100 exhibitors and
over 60,000 attendees from over 100 countries. But I was most struck by how
many celebrity chefs had their faces blown up much larger than life on booth
graphics and the electric vibe around the celebrity chef stage area where they cooked
for attendees and press cameras. This was a change from the last time I
attended, when most chefs  were virtually
unknown.

Attendees
talked enthusiastically about the chefs they got to meet, and  watched eagerly as the chefs demonstrated
their latest techniques and licensed products. A Movie Star excitement rippled
through the 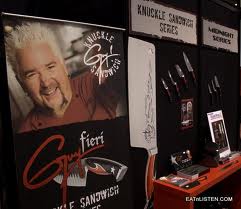 crowd. This excitement  added
a real buzz to the show – a trade
show. We experience much the same excitement at our Chicago Toy & Game Fair
with many of the consumers excited to meet the inventors of toys and games. But
this was a trade show.

Then
flipping through one of the Housewares Show dailies, there were article titles
such as “Gorham Launches Rick Bayliss Collection” and “Meyer Corporation Showcases
New Cake Boss Brand.” Another turn of the page had Guy Fieri’s life-size
picture smiling at me.

Decades
ago, housewares were a commodity much like toys and games are now. Making chefs
into household names and bigger-than-life characters changed all that. Now
there’s the sparkly and appealing celebrity factor that makes the products more
special, more  entertaining, and easier for
consumers to connect with on an emotional level. This is what our industry
needs to do to stand out in today’s world. When it comes down to it, we are
competing for the very same dollars housewares are. We spend money on gadgets
we don’t need and hardly use, and those egg beaters and microplanes certainly
aren’t as important as play is to individuals’ and society’s health and
wellbeing. We are in the entertainment industry and we have IMPORTANT products
that are VITAL to families and the community at large.

Consumers
are starting to understand just how vital. I posted a link to an article this
morning that I wrote

for ASTRA’s consumer newsletter, The WooHoo Factor, and it appears to be going viral. There were almost
50 shares (shares, not likes) in less than 3 hours from our Chicago Toy & Game and our Games for Educators Facebook accounts.
ASTRA asked for an article on board games, but I could have written about play
in general as well. http://www.yourneighborhoodtoystore.org/play-together.asp?i=89

This
past NY Toy Fair, there were more companies than ever smartly using the
inventors of their toys and games to demo products in their booths. And who better?
– The inventors love their products and have a vested interest in companies
doing well with  them. I saw media
articles and blogs coming out of NYTF that included excited mentions of meeting
the inventors in booths. Dare
I imagine that one day I see NYTF, Nuremberg, ChiTAG, London, Hong Kong, etc. exhibitors showcasing inventors to the extent the International Home and Housewares Show
does chefs? I hope so, because that means we will be competing for market share
as our competitors already effectively do, and our manufacturers will be selling
the particular brand of magic that inventors/designers instill in their creations
that is currently being ignored and given away for free.