I just finished reading an article about him. Having worked in his studio after his death in the mid 70’s, and never having had the opportunity to meet him, I am always fascinated to learn more about this toy industry genius/legend who ‘invented’ the business of toy invention and licensing.

He wasn’t just the original, the biggest, the best of the toy inventors. He didn’t just make and lose fortunes more than once, and he wasn’t just a legendary paranoid crazy-man. In the article he comes across as one of the modern toy industry’s early intellectuals, with some profound insights into what toys really are. 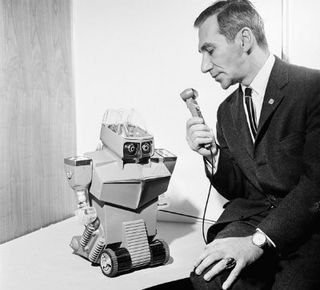 On Marvin himself, and quoting from an article in an unknown publication, written by Adriano G. Delfino:

“Although he lives in a world of childish whimsy when he is creating or testing a new product, (Marvin Glass) is a complete man in the field of discourse . . . the words that come out are those of an astute observer of the passing parade – eloquent, philosophical, even sparkling at times.”

From Marvin: “Consider the word toy. As a verb or as a noun, it connotes frivolity, insincerity, caprice, and trivia.“ He wanted to change the public image of toys from unnecessary, childish frivolities, to have them thought of as consumer products performing a needed function. “A toy is–to a child–as much of a consumer product as a washing machine is to a housewife, a typewriter to a secretary, or a rivet gun to a construction worker. It is designed to do a specific job,” he maintained.

And on the subject of laughter, a personal favorite of mine, Marvin Glass says, “Humor is the greatest antidote to self righteousness, intolerance, bigotry, and other hallmarks of fascism, naziism, communism, colonialism, and all the isms that have plagued mankind.”

I would have enjoyed such a conversation with him. I couldn’t agree more. I have come to exactly those same conclusions over time.