Since Alexander Graham Bell patented the telephone on February 14, 1876, the phone has served as a prop for various scandalous and playful moments in history. Bell originally developed a prototype with the innocent intention of creating a “harmonic telegraph” that allowed individuals to speak to each other from different locations. Journalist and historian of science Seth Shulman suggests that Bell’s story soon became convoluted when it evolved into the pursuit of a love interest and stolen intellectual property. 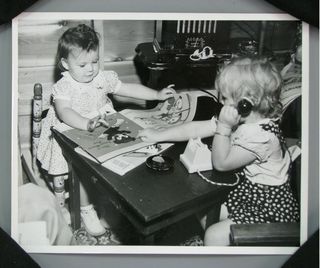 A few years after Bell patented his design, George W. Coy established the first telephone exchange. Young boys and men worked the early switch-boards, but their mannerisms proved too rowdy and employers often accused them of defacing the boards. Companies soon hired young, middle-class women that afforded a more refined image. Lynn Peril, author of Bust Magazine’s “Museum of Femoribilia,” explained that female operators used “voice expression to instill in a subscriber a feeling of pleasure” and when time permitted, operators occasionally flirted with lonely callers.

By the 1890s, people referred to central telephone exchange operators as “hello-girls” due to the association between the greeting and the telephone (hello first entered the dictionary in 1883). Perhaps game designer J.C. Singer hoped to piggyback on the newfangled machine’s success and catch-phrase when he invented Hel-Lo the Telephone Game in 1898. During game play, two players held on to hollow wooden “telephone” spools connected by a string. They proceeded to speak into the telephone reciting humorous sentiments from more than 100 game cards. Hel-Lo the Telephone Game resembles a common game many young children still play today. One person whispers a statement to another individual and that person passes it along to the next until it reaches the end of the line. The last person recites the sentence to the rest of the group only to discover that the message got mangled along the way.

With text messaging and email, most people rarely pick-up the phone to place a call. Perhaps in honor of Bell’s patent more than 125 years ago and the forthcoming Valentine’s Day, you might phone a special friend to say “hello.”