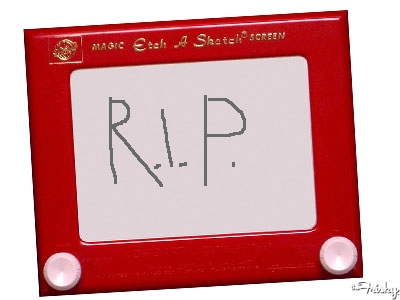 Sometimes, when a product becomes as iconic as the Etch A Sketch, it can be a bit surprising to realize that someone invented it; and in fact is still alive.  Well, the inventor, Andre Cassagnes, was alive until just recently.  He died in France at the age of 86.

According to an Associated Press article by Chris Talbott (“Inventor of Etch A Sketch dies at 86”):

…an electrical technician, Cassagnes came upon the Etch A Sketch idea in the late 1950s when he peeled a translucent decal from a light switch plate and found pencil mark images transferred to the opposite face…Ohio Art saw his idea at the Nuremberg Toy Fair in 1959. The toy, with its gray screen, red frame and two white … was launched in 1960 and became the top seller that holiday season.

Ohio Art is reported have sold over 100 million Etch A Sketches, which is certainly impressive.  More impressive to me, however, is how this toy which replicated the look of a 1950’s television set managed to stay not only relevant but iconic in world culture.

How iconic; look no further than the last Presidential election where the use of the Etch A Sketch as a metaphor by Mitt Romney’s campaign manager needed no explaining.  What accounts for its continuing popularity?

Here are my thoughts:

In short, Etch A Sketch does what a great toy should do; be designed with simple elegance, provide an element of magic and allow for mastery.  Goodbye Andre Cassagnes, your creation lives on; long live Etch A Sketch.

Thank you Richard Cocca for bringing this to my attention.