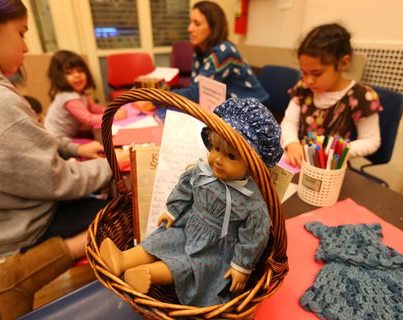 The public library may well be the one of the last true
public spaces  in American life.  It is a place where people of all social
classes and races come together in one location at one time.   That is one of the reasons that the American
Library Association has long been a proponent of board games.   They see them as a great way to bring
disparate people around the same table at the same time and give them a chance
to get to know each other.

It was with this in mind that my eye was drawn to a great
New York Times article by Corey
Kilgannon, “A Doll’s Magic, Free to Renew.”
It seems that the Ottendorfer branch of the New York Public Library,
situated in the East Village, has been lending out an American Girl Doll.  The doll has traveled “from one girl’s home
to another’s for two weeks at a time, spending nights inside cramped apartments
in public housing projects and inside luxury high-rises….”

Many of the girls who take her home come from families
that simply cannot afford the cost of an American Girl doll. So the library
works as a social leveler in giving all children a chance at the doll and what
she represents and, by doing so, allows each of them to interpret her in their
own way.  As the

article puts it so
eloquently, one time “…she returned with her hair in dreadlocks. Another time,
her long blond locks were primly fashioned into a traditional bun. One day, she
came back wearing a uniform of the exclusive all-girls Brearley School on the
Upper East Side of Manhattan.”

It’s a great story about the power of dolls.  Wouldn’t it be nice if every American library
had dolls to lend?