It was in a long ago presentation in some hotel room near O'Hare Airport, to Steve D., a toy scouting executive of a major East Coast toy company.

Now, no doubt you have played with or seen someone else hold a large sheet of plastic or cardboard and shake it to make a sound somewhat like thunder. Different materials and sizes make different thunder-like sounds. Cool sounds. "That could be a toy," I reasoned. 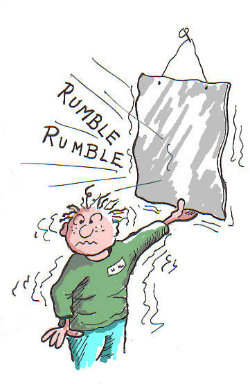 I was just starting out on my own, just barely having left the warm embrace of the Marvin Glass studios. There was no more paycheck and paid vacation, etc. It was sink or swim.

Among the other modest concepts I must have shown in that meeting, I pulled out a sheet of plastic and shook it, proudly, to demonstrate the thunder-like sounds it made. That’s when the client turned to me and said, “You’re kidding, right?” I told him I was, even though I wasn’t.

Come to think of it, that may have been the fateful meeting where he told me that if I didn’t start showing them the types of products that he and his giant toy company were looking for, they were not going to see me any more. Gulp. That was a splash of cold water in the face. And so I began to pay more attention to what they wanted, and over the years the relationship grew and thrived up to the present day. Thank you, Steve D.