In yesterday's post I talked about the usefulness of toys and games beyond traditional markets and play patterns.  The examples highlighted how toys are being used to create portable energy sources and medical devices for developing countries, and to teach kids the basics of science, technology, and invention.

The two stories I’ll share with you today give examples of how play products are being used for physical therapy and even to save lives.  But first,…I wanted to include an interesting story I spotted yesterday. An article and video by Huffington Post illustrates how Slinkys are being used in the study of physics. Through experimentation, scientists have found Slinkys useful for explaining unusual principles of physics. They’ve discovered that the bottom section of a Slinky remains completely suspended in midair until the top section collapses onto it.  This is not visible to the naked eye, so you’ll want to take a look at this remarkable video to see how cool this really is! http://www.huffingtonpost.com/2012/12/19/slinky-science-video-physics-springs_n_2325474.html 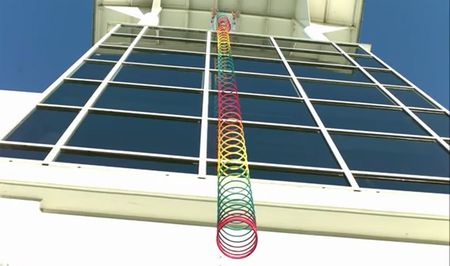 The Study of Physics

And now, on to our regulary scheduled articles….

Last year, Ernie Fessenden from Minnesota sent his enlisted brother a uniquely modified remote-controlled truck as a way to help keep him safe while serving in Iraq.  He never imagined it would save the lives of six soldiers.

Ernie, along with the help of Kevin Guy, the owner of a hobby shop in Rochester, Minnesota, decided to transform an RC truck by mounting a wireless camera to it.  The camera would then display images back to a small device giving soldiers an idea of the potential threats that lay ahead.

Upon receiving the truck, Chris loaned it to another patrol searching for roadside bombs. After sending the truck out on a routine search, it hit a trip wire that was rigged to 500 lbs. of explosives.  Although the RC truck was completely destroyed in the explosion, the six soldiers in the Humvee were unharmed.

According to Chris, one of the great things about the RC truck is that it is able to keep up with the Humvees and can actually go ahead of the patrol and scout things out.  So far, the truck has been successful in finding four improvised explosive devices (IED).

Another soldier in Afghanistan, Lieutenant Sam Brown, was not as fortunate as the aforementioned soldiers.  When Lt. Brown’s Humvee was attacked and he was struck by an improvised explosive device he sustained third degree burns over 30% of his body.

After being transported back to the US, Brown endured more than two dozen surgeries and underwent daily wound care and physical therapy which proved to be quite painful.  Because the treatments were unbearable at times and Brown was concerned about the addictive nature of the painkillers, his doctor suggested an unconventional type of treatment – a video game.  The virtual reality video game, SnowWorld, created at the University of Washington by two psychologists, Dr. David Patterson and Dr. Hunter Hoffman, was specifically designed for the experimental treatment of burn victims just like Lt Brown.

Dr. Patterson found that the treatment of pain worked by putting an individual into a virtual or alternate world and would continue to work as long as the patient’s focus remained in the virtual experience.  Dr. Hoffman focused on using “virtual reality distraction” to help patients confront their fears; however, he took the opposite approach when it came to pain management.  He hypothesized that the icy, calming environment of SnowWorld would help patients forget about their burn wounds.

In the game, players throw snowballs at penguins while listening to a Paul Simon song. By distracting the patient and keeping their thoughts off of their bodily condition the injured become so engaged with the game that it diverted the brain’s attention away from the pain signals.  Patients were able to undergo physical therapy with 35-50% less pain and some did not even notice they had undergone therapy.  A small study conducted by the military in 2011 concluded that, for soldiers in the worst pain, SnowWorld actually worked better than morphine.

The traditional benefits of play provided by toys and games are seen in physical activity, the promotion of mental health, social interaction and development, as well as increased learning.  These traditional value boundaries are shifting, even enlarging.  The toys and games of today and tomorrow are breaking through past limitations, broadening their purpose and surpassing many of our preconceived notions.  Where will the toys of tomorrow take us?  No one can know for certain, but one thing is for certain -you’ll need to be looking beyond the toy aisle.