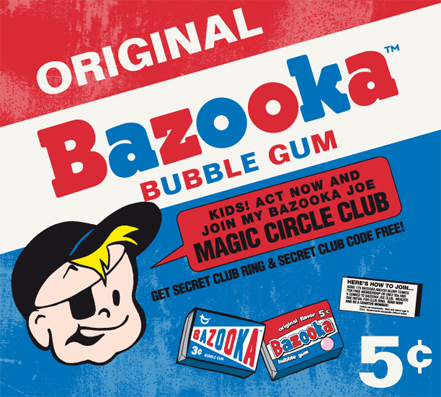 If you are over 30, you probably remember Bazooka Joe bubble gum from when you were a kid.  They were pink squares that came with a miniature comic strip featuring a boy wearing an eye patch.  The comics were neither particularly funny nor interesting but it truly felt like a value added.  You would open the package, smell the sweet odor of bubble gum, chunk it your mouth and chew for the next hour.  While doing so you would read the Bazooka Joe cartoon and think to yourself:  “What the hell happened to that kid’s eye?” 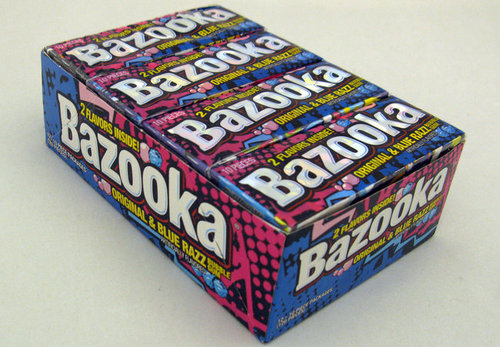 It appears that Bazooka Joe has fallen on to hard times.  That is according to Andrew Adam Newman in a New York Times article entitled:  “Change Comes to Playground Funny Papers.”  First of all, the problem is bigger than Bazooka Joe.  Bubble gum sales have fallen 38% since 2007 (Yike! as Bazooka Joe might say).  Bazooka Joe, however, has fallen 48% in the same period (double Yikes!!).  Worse than that, only 7% of children are aware of Bazooka Joe.

As a result, the company is fighting back by getting rid of the cartoons and “…the red, white and blue color scheme and geometric design of the brand, [replacing it] with more saturated hues like fuchsia and yellow, and with the splattered-paint look of graffiti.”  Is it a good idea; in the short term the answer is yes.  “Among those not carrying the brand now that will begin stocking it early in 2013 are Target, 7-Eleven and Kroger.” 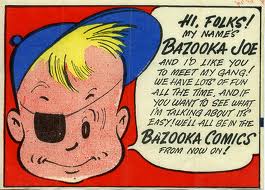 It does make you question, however, why the need for such a fundamental change?  First of all, aren’t Bazooka Joe and his patch weird enough to be able to attract an adult audience that loves the memory and the slight suggestion of rebellion that comes from having a plug of bubble gum in your cheek and a patch on your eye?  Shouldn’t Bazooka Joe be appearing on t-shirts, apps and pillow cases?

Also, the cartoon insert was a value added.  Granted it was not a great value added but never-the-less it made chewing bubble gum a bigger experience, kind of like being able to access a website for kids of today.

The new look is, well, a new look.  Shouldn’t they have somehow kept elements of the original packaging that is remembered by generations of adults?

The question that confronts Bazooka Joe is the one that challenges any company confronting a cultural shift.  How do you remain relevant to a younger consumer population while not just retaining but attracting more of those who know your brand?

Bazooka Joe is to be congratulated for getting back on the shelf.  Could they, however, have done more?  It will be interesting to see.