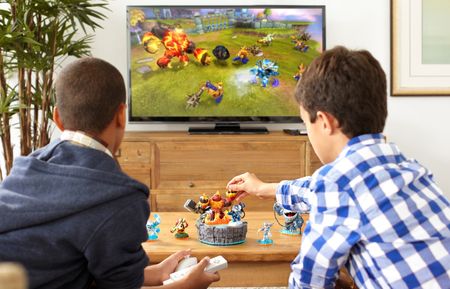 There's a giant opportunity underfoot for Toys 4 Bob as the Activision studio unleashes Skylanders Giants, the follow-up to its highly successful Skylanders Spyro's Adventure which took its place as one of the hottest buys last holiday season.

On shelves for just a few weeks, the cross-platform toy (twice the size of the original Skylanders) melds the physical and virtual realms and brings 16 new characters with new powers into the fold. The product is topping many kids' most-wanted lists and expectations are that it will be one of the most coveted items nestled near the menorah or tucked under the Christmas tree.

The groundswell of excitement surrounding the products have surpassed the expectations of Paul Reiche, ceo and development lead for the Novato, Calif.-based company. "It's a very surreal experience to be in the middle of a phenomenon and see kids with the toys in their hands. Interestingly, my neighbors are leaving notes in my mailbox because they know I'm the man with the Skylanders and that increases the personal meaning to me." 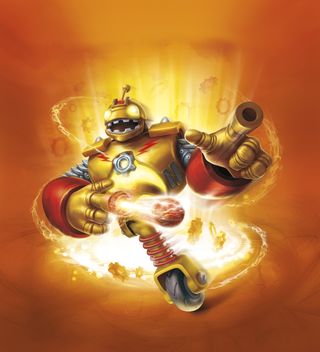 Upping the business stakes for the enthusiastic executive is a first-ever bonus for the company; a clear signal to Reiche and partner Fred Ford that the company is profitable and all the hard work has paid off.

Now back to that giant retail footprint.

More than 50 new toys and lots of interesting exclusive products are on shelves. Taking a lead role is Toys "R" Us which named Skylanders Giants to its "Fabulous 15" list for 2012 and nabbed the exclusive on the limited edition Legendary Series of toys, including alternative versions of the new Giant character Bouncer, Series 2 Stealth Elf and a Triple Pack of Jet Vac, Slam Bam and Series 2 Ignitor – all of which feature enhanced in-game powers.

GameStop, too, has taken a strong stance giving it prime real estate both in existing locations and new GameStop Kids holiday mall stores with an exclusive Golden Dragonfire Cannon Battlepack as well as additional characters, throws, backpacks and carriers.

The licensing program is packing a powerful punch with more than 100 licensees worldwide creating products featuring faves such as Spyro, Chop Chop, Gil Grunt and Stealth Elf on everything from apparel, accessories, outerwear, plush and luggage. The characters are also appearing on a high-profile packaging promotion with Frito-Lay. Fans will also be able to create a profile to house their characters unlocked in the iOS games using Activate, a new mobile-exclusive platform from Activision. The platform, which integrates current social media applications and uses Facebook as its log in process, is required for any online modes featured in the mobile titles.

With so much going on these days for Skylanders, it's no wonder that Reiche and his team are optimistic about the future and well on the way to becoming giants in the gaming and consumer products marketplace.