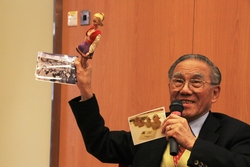 While recently visiting China and Hong Kong I had the pleasure
of spending time with one of the toy industry’s great influencers:  LT Lam.
If you know LT, you cannot escape the incredible vitality that belies
his 88 years.  LT is one of the founders
of the Hong Kong and Chinese toy industries.
Today, he, along with his sons Jeffrey (who is on the Hong Kong City
Council) and Daniel run Forward Winsome and the company’s seven factories.

LT’s life is a prime example of what these men and women had to overcome and what they have accomplished.  Life did not start easily for LT.  On Christmas day, 1941, his father did not
come home from work.   LT went to find
him and discovered his body, lying in the street, across from what is today the
Regal Hotel in Causeway Bay, Hong Kong.
His father had been bayoneted by a Japanese soldier during the invasion
of Hong Kong. LT confronted the soldier who told him that his father had
not stopped when ordered to do so.  The
soldier had not known that LT’s father was deaf.

LT’s father left the family $200 in cash and 2 acres of
farm land in China.  LT’s mother took the
family to the farm where they stayed for the next three years.  Life in China was hard for LT and his
family.  He would, in order to support
his family, walk ten miles each way to sell vegetables at a roadside market.

LT was and is a powerful individual and his father’s
death did not cause him to hate nor did it effect his determination to succeed
in life.  LT returned to Hong Kong after
the war where he took a job at a newsstand in the busiest section of Hong
Kong.  That job became a critical element
in LT’s life.  Because he worked
there:  He learned English; he met people
from all walks of life and he began arbitraging products that were in demand.

LT, still an incredible connector of people, used his new
relationships to help him get started in the new business of plastics.  In 1949 he recognized this new material as a
major breakthrough and was drawn to it (and thought others would be) by the
bright colors after the dark war years.  LT was the first person to make plastic
toys in China.

LT found a partner and developed hand and foot operated
plastic extrusion machines.  These
non-electric, human powered instruments turned out Hong Kong’s first
plastics.  LT went on to found factories in
Hong Kong and was the first to set up a toy factory in mainland China following
the easing of restrictions by the Chinese Communist leadership in 1976.

I asked LT if he wasn’t taking a chance that the newly
opened Communist China might just nationalize his factory. No, he told me, he
was never worried.  He believed in China.  He knew change was inevitable. LT was right
and today his state of the art factories produce toys for the world’s largest toy
companies.

There is not sufficient room here to tell LT’s full story
but the highlights include his invention of the Rubber Ducky (yes, it was LT
who came up with that classic design); creating clothes for the doll look

alike
the German Lilli doll that was the inspiration for Barbie and producing a joint
venture with Hasbro that manufactured and sold Transformer figures in
China.  LT’s factories today produce 60%
of the world’s Play-Doh for Hasbro.

LT’s 3 children, 6 grandchildren and 2 great
grandchildren have attended Cornel, Boston University, Tufts, Ithaca and the
University of South Wales.  Some are in
the business so you may be seeing Lams in the toy industry in the 22nd
century.

One final and very important note about LT; he is an
extremely charitable person having endowed the LT Lam Research Awards at
Cornell University: provided educations for Chinese underprivileged children;
underwritten a library and having established the L. T. Lam Training and
Research Centre at the Guangdong Toys Association which works with young
Chinese children who are interested in entering the toy industry.  He has, in short, accomplished (and is
accomplishing much more) in giving back to his communities and the toy
industry.

On a personal note, LT has been generous to me with his
time, his friends and his memories.  If
you have the opportunity, make it your business to get to know LT.  He is a giant of the global toy industry.

And, by the way; LT’s first toy?  It was a ping pong ball given to him by an
American banker who employed LT’s father as his personal chef in Hong Kong when
LT was 4 years old.  .  He cried when it broke.