In my last posting, I listed the first 5 of what I consider to be the most important dolls of the 20th Century.  In this posting, in no particular order, I give you 6-10:

Pleasant Rowland and her
Pleasant Company managed to create a market for dolls that were inspired by
history.  Introduced in 1986, these 18”
dolls taught history via great back stories and dolls with authentic
outfits.  The company was eventually
purchased by Mattel (they certainly keep coming up in this list, don’t
they?).   Pleasant Rowland is to be
credited for created a doll category that, by treating girls as intelligent and
inquisitive people, created a product category that today generates 100’s of
millions of dollars.

Is GI Joe a doll?  Yes, he is.
He comes with numerous accessories and habitats just like his fashion
doll sisters, it’s just that there are hand grenades instead of earrings.  Hasbro did have to call them Action Figures (do
we still have to?) so little boys would play with them.    Boys love them as can be witnessed by the
power of the GI Joe franchise and the action figure category of toys it helped
launch. Raggedy Ann and Raggedy Andy
are the only rag dolls to make the list.
Based upon a series of popular, early 20th century books by
Johnny Gruelle, these dolls harken back to an era when probably most dolls were
made literally from discarded household rags (probably the same rags that went
into making patchwork quilts).   These
dolls remind us of another, simpler time. 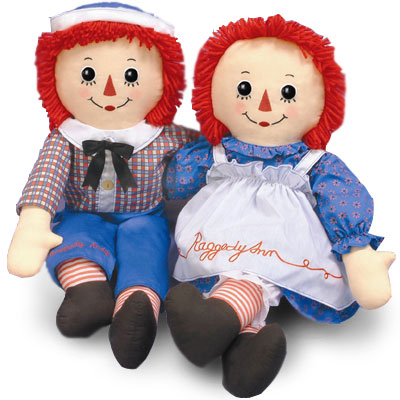 Though not the first
celebrity doll, the Shirley Temple doll is probably the most famous.  The Hannah Montana and Justin Bieber dolls are
her direct descendants.  Produced by
Ideal, the doll was a

phenomenon in the 1930’s when Shirley Temple and the
Great Depression were at their height.
Dolls then, like now, gave children comfort during hard times. Who would have thought that
something so frankly odd looking as a Cabbage Patch doll would create such
passion in adults?  Any of you who can remember
Cabbage Patch Dolls will remember the fist fights that broke out between normally
well-adjusted moms in toy and discount stores around the country.  Cabbage Patch dolls can probably be credited
with creating a class of doll that depend less upon beauty than character and novelty.