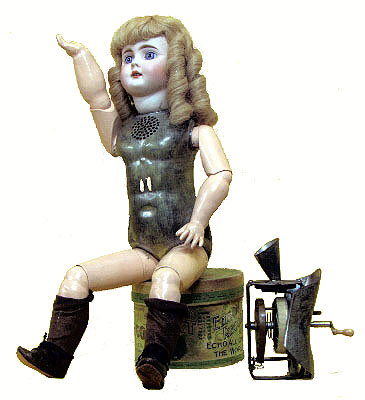 I thought it would be fun and interesting to consider
those 20th century dolls that expressed technological breakthroughs
and made cultural statements.  When you
review my list, you may note that I have not included Barbie or Bratz.  These two lines of dolls are titans of the
doll category and easily overshadow every other doll on the list. Barbie,
because it created the fashion doll industry and reflected the fashion of a
generation.  Bratz, because updated fashion
to match the edginess being seen on the streets and because of its ambiguous depiction
of race.

I decided, however, to leave them out of the top 10 list
because we all already know so much about them.
Let’s therefor take a look at the dolls that have been overshadowed by
these giants. Here, in random order, is my top 10:

No, it wasn’t from Mattel, it was from the Edison
Phonograph Toy Manufacturing Company.
The doll came out in 1890 at sold for $10 at FAO
Schwarz.  The doll was 22” high and had a
tiny (tiny for those days) recorded cylinder that worked with an equally tiny
record player.  The child turned a crank
in the back of the doll and it sang Twinkle, Twinkle Little Star.  Unfortunately, the idea was ahead of the
technology and the product quickly broke. Only 500 were sold and today it is a
rare, collectable. 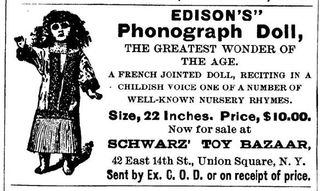 Edison couldn’t get it right but Mattel sure did with the
extremely popular Chatty line of dolls.  The
doll ultimately said 11 different phrases including “I Love You” and “May I have
a cookie.”  In the 1960’s it was only
second to Barbie in popularity. 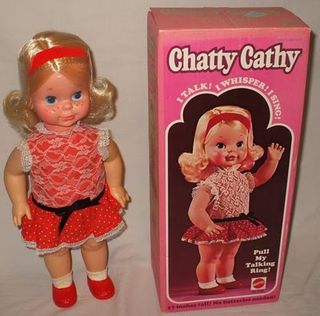 The Lilli Doll, a German post-war creation, was the
inspiration for Barbie.  Its adult body
and face gave the Handlers their idea for Barbie.  I had always read that it was considered
sexually provocative but the doll did not strike me as such.  I found out, however, that the Lilli Doll was
based   upon a German comic strip that
was indeed provocative.  In one cartoon,
a policeman tells Lilli that her two piece bathing suit is too provocative.  Lilli  responds
by saying “Which piece do you want me to take off?” 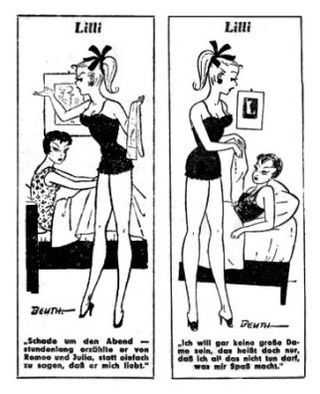 Christie was the first African-American fashion doll.  Produced in 1968 by Mattel, it was part of the
Barbie line.    Mattel
was certainly responding to the shifting political and social undercurrents of
the 1960’s when it gave Black children a doll that looked more like them.   History tends to look at big events but Mattel’s
decision to produce Christie certainly had an impact on how children of the 60’s
and 70’s saw themselves and others. Betsy Wetsy brought the “real world” into the
nursery.   Introduced in 1954 by Ideal,
it was promoted as the only doll that could “Blow Its Nose.”  Not only that, it wet itself and, of course,
drank; how else was it going to be able to wet itself?