In the early 1900s, more than 30 circus companies toured America. When the circus arrived in town, schools and businesses closed so children and adults could marvel at the spectacle, which often began with an elaborate parade featuring circus performers and exotic animals. In 1903, Philadelphia toy maker A. Schoenhut jumped on the proverbial circus bandwagon when he introduced a line of miniature circus figures called the Humpty Dumpty Circus. 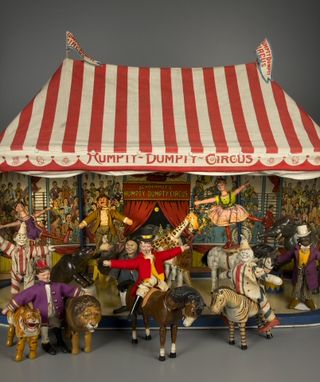 Schoenhut’s menagerie included a complete entourage—musicians with miniature instruments, lady circus riders, animal trainers, acrobats, ringmasters, and clowns. The circus performers’ wardrobes presented an array of vibrant colors. One acrobat was dressed in a dazzling tutu, the animal trainer wore a bright purple jacket, and the clowns’ garments were adorned with stripes, dots, and zigzags. The ring leader looked dapper in a red coat, a black top hat, and a pair of well-polished riding boots. The line also included an array of animals such as a tiger, a lion, an elephant, an ostrich, and a buffalo. All of the animals had glass eyes and moveable joints. Soon after Schoenhut introduced the line, toy stores also began to carry booklets with examples of tricks a child might perform with figures from the Humpty Dumpty Circus. These feats often required the use of Humpty Dumpty Circus props such as circular metal cages, wooden ladders and chairs, and pedestals, which were sold separately. The lithographed canvas tent is perhaps my favorite piece of the ensemble. The backdrop depicted an audience and group of performers and I imagine that the ringleader shouted, “Ladies and gentleman, boys and girls!”

By the 1920s, Schoenhut produced reduced-size sets in hope that the less-expensive option would increase sales. The company thrived until consequences of the Great Depression forced Schoenhut to close shop. A few years later, Schoenhut’s son Otto started a new toy company that primarily sold building kits and musical instruments. The Humpty Dumpty Circus resurfaced in 1950 when Nelson B. Delavan asked for the rights to produce toys under the name. He created and sold toys similar to their predecessors for two years. Many of us experience the magnificence of the circus by watching old films like The Circus, reading books like Water for Elephants, and catching behind-the-scenes glimpses of the Big Apple Circus in the television program Circus. But individuals that play with an A. Schoenhut whimsical set are genuinely reminded of the centuries of artistic expression, grand scale performances, and social values depicted through the circus.