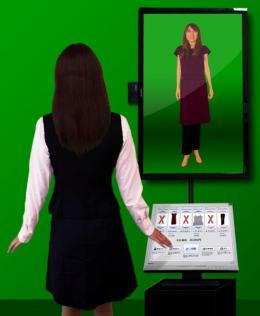 A number of years ago I stumbled into a shoe store that
had a circus theme – yes, I said a circus theme.   It featured a raised podium in the middle of
the store at which sat a gentleman (I think he was supposed to be kind of a
ringmaster) who sat at a microphone.

As I walked towards a display of tennis shoes, I started
to pick up one that was blue.  As I did
so, I heard an announcement, “BLUE TENNIS SHOES NOW ON SALE; 10% OFF).  What a coincidence I thought until I picked
up a pair of suede ones and heard:
“SUEDE SHOES NOW ON SALE; 20% OFF).

I turned to look and realized that the “Ringmaster” had
been following my movements and that each time I picked up a shoe he announced
a sales on the pair I was holding.  I was
impressed with but also extremely wierded out by such an intrusive
concept.

It feels like, at least to me, that that is
what the store of the future is going to be a bit like, only instead that the
“Ringmaster” will be virtual rather than human.
That thought came to me as I read a Boston
Herald article entitled, “Store of the Future Shown.”  Written by Donna Goodman, the article
states:  “Technology will alert [store clerks] when a customer enters
a store and give them access to their past purchases to provide better
service.”  Better service, yes, but also
a lot of help in making a sale; effective but a bit creepy.

It
won’t, however, all be creepy.  The
article went on to state:

In-store access to product ratings and reviews will
become standard and targeted in the future… and will be distributed via
digital signs and interactive displays.  Digital
signs now largely designed to

present general information or entertainment soon
will connect to consumers’ smartphones or physical actions for a more
interactive and personalized shopping experience…An augmented reality app …
lets customers see how furniture fits in their homes …And a Cisco dressing room
prototype uses a large screen to let customers “try on” clothes without doffing
their own.

Bricks
and mortar is going to change; it has to change.  Let’s just hope it doesn’t get too creepy.