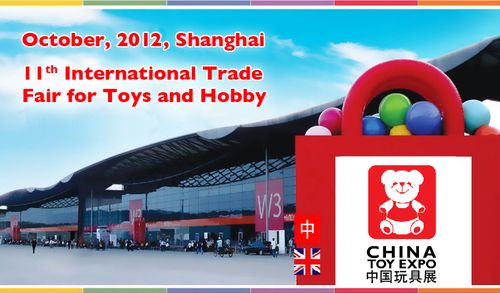 This year’s China Toy Expo was bigger and busier than last year’s show.  There was, of course, an abundance of Chinese toy companies and distributors displaying goods but there were also more non-Chinese companies than last year.  Some of those with booths that I spotted were: Mattel, Walt Disney Company, Toys R Us, Vtech, Maisto, Hape, MGA, HABA, and 4D Cityscape.

Others, like Manhattan Toy had distribution partners showing their goods.  In general, the quality of all booths was upgraded from last year.

This was my second year of attending.  Based upon my experiences, here are some tips for those wishing to attend next year’s show:

If you are an attendee, do not attempt to gain entry in the first two hours of the first day of the show.  It is just too busy.  Believe me, I learned the hard way.  I have never seen so many people trying to get into a show at one time in my life.  You feel like you have been swept up into a river of people rushing through doors and security points.

Whether you are an exhibitor or an attendee, make sure you have someone with you who speaks Chinese.  Shanghai is not Hong Kong so there are far fewer people who speak English and those who do are not necessarily fluent in the language.

Take your time and walk the show before attempting to make contact.  The sound levels are high, the culture different and the general ambience can be overwhelming from what is typical for a western person.  By taking your time you can become acclimated and make better approaches and decisions.

I found most of the Chinese I met to be highly accommodating and friendly.  They were eager to do business.  So, bring a smile and an open mind.  It could make a difference in how you do and how you feel.