Sir Harry Kroto attested that playing with the nuts,bolts, and perforated metal strips of the Meccano (also know as Erector in US and invented originally by Frank Hornby, a Liverpool shipping clerk) construction toy helped him to win the 1996 Nobel Prize for Chemistry.
He went on to say, “Meccano teaches engineering and architectural skills in a way that Lego doesn’t. If we had more Meccano we would have trains that worked. There would be more engineers with better basic understanding.” 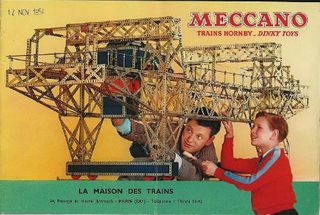 Harry Kroto decried the falling popoularity of Meccano and the rise of Lego as a ‘disaster of Modern Life.’ He would blame that for the alleged fall in the quantity and quality of Britain’s young engineers and scientists, according to an article in the July 8, 2001 Sunday Telegraph newspaper. Lego vs Meccano aside, the message here is the profound importance of toys in the world, due to their impact on us as adults, and the contributions to the world that we make, or don’t, as a result.

A Nobel Prize winner, on the paramount importance of Toys. Just what I have been saying.
'Nuff said.