In case you didn’t know:

Paraphrased from Vol. 1, No. 1 of the Marx Toy Collector Newsletter, circa 1981

Louis Marx, the one and only KING OF TOYS, started out in about 1921 with his brother Dave, buying up dies for making lithographed metal toys, from his former boss, F. Strauss.

The brother started out making the iconic rope climbing Monkey and an African American version of same, about 8000 pcs/day. While these had already been on the market since before the turn of the century, Marx brightened the colors, made other sizes, and marketed them under the name ‘Zippo’, selling them in the 1925 Sears catalog for 19 cents a piece. In 1929 they went up to 21 cents – probably due to rising labor costs in China. 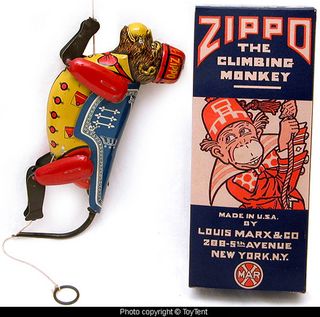 Just kidding about that, of course, as these were all made in Brooklyn or thereabouts, most likely. But costs go up everywhere, and that is why all toys are made in low-labor-cost markets. Otherwise the toys that we buy every day would cost so much, no one would be able to afford them.

Our new Master Moves (M3) Mickey Mouse will be $80 retail this year, made in China. Were it manufactured in the US it would cost $500 and no one would buy it, and therefore it would never come into being at all, and all the entertainment and perhaps inspiration that it will provide would be lost.

And now, back to our story:

Many Marx toys would have lithography on the backside. The toys were made from recycled metal, repurposed, and allowed Marx to undersell his competition. He became a millionaire at quite a young age. The publisher of the newsletter had a soft spot for Marx toys in particular, he said, because of the cheaper design, the erratic action, and the bright colors on the tin.

Marx may have been the King Of Toys, but it seems quality was not his forte.