Despite the fact that nominations are still being taken for some of the TAGIE Awards (Toy and Game Inventor Excellence Awards), three of the recipients were announced yesterday! (Read the article here: http://www.globaltoynews.com/2012/08/tagie-award-honorees-announced.html)  Since these people are industry gems, I thought I would take some time to share who they are and why they're being honored.

This year the Hassenfeld Humanitarian Award goes to Peter and Andrew Brown for their work with the Toy Trust and Help a London Child. An industry veteran, Peter has worked at Palitoy, Tomy and now at Flair with his son, Andrew. Peter is also responsible for helping launch Playmobil in the UK and K’NEX outside of the US. 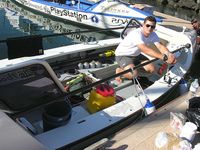 When Peter received the Lifetime Achievement award from the British Toy & Hobby Association in 2011, Alan Hassenfeld said, “Peter embodies all that is good in the toy industry” and spoke of his “untiring efforts to help children in need.” Peter joined the Toy Trust, which raises money from within the toy industry for children’s charities, when it began in 1991 and has been a member ever since. At the end of last year Andrew competed and took 2nd in the Talisker Atlantic Challenge to raise money for the Toy Trust and Help a London Child. He rowed 2,935 miles across the Atlantic Ocean – alone – and it only took him 40 days! If you’d like to read more about his adventure: http://www.andrew.rowtheatlantic.com/

The Lifetime Achievement award is going to be presented to the Coster family – Theo, Ora, Boaz and Gideon. While they've created over 155 different licensed concepts, they’re probably best known for the Hasbro classic,Guess Who? as well as the ThinkFun favorite, Smart Mouth. Boaz, Theo and Ora’s son, is the co-inventor of the childhood staple, Elefun.

Theo and Ora founded their business in 1965 in Tel Aviv, Israel and after using the name Matat for a few years changed it to Theora Design (created by combining their names).  Boaz and Gideon joined later and added knowledge of advanced technologies and marketing to the team. An additional interesting tidbit about Theo Coster is that he was a classmate of Anne Frank and produced a documentary featuring him and 5 other classmates called Classmates of Anne Frank, which lead to a book called We All Wore Stars: Memories of Anne Frank from Her Classmates. If you’d like to see more of the products created by the Coster family and Theora Design you can head to their website: http://theoradesign.com/

“The TAGIE awards have always been focused on the inventor community and we thought it was important to include and recognize those who have advocated for inventors.  Over the years many professional inventors have suggested we recognize Mel so we’re happy to be honoring him this year.”

Taft graduated from Harvard Business School in 1949 and then jumped into a position at Milton Bradley. According to “The Playmakers,” by Tim Walsh, Taft encouraged Milton Bradley to “advertise on TV like toy giants Hasbro and Mattel.” And the result was impressive, as Milton Bradley became the largest game company in the world, even surpassing rival Parker Brothers! But Mel also had a great eye for good ideas. Over the years he worked on games like Operation, Twister and Simon – just to name a few! At one point Mel said, “independent inventors contribute more than 50% of the good ideas companies market and 75% or more of the big hits.” He knew that keeping an eye out for engaging product from inventors was good for business, and even challenged inventors to push the envelope with what they presented.

Ron Weingartner, co-author of the “Toy and Game Inventor’s Handbook” wrote a wonderful post on Mel on his blog back in 2010 that I urge you to read: http://toydreamers.blogspot.com/2009/12/where-have-you-gone-millens-w-taft.html

If you are interested in finding out more about the TAGIE awards and how you, yes YOU can attend please visit: http://www.tagieawards.com/

If you are already attending T&GCon – your ticket is already included in the conference price! If you are interested in signing up, why not do it now and save $100 off the conference by using The Game Aisle’s coupon code!http://www.thegameaisle.com/discount-to-toy-game-inventor-con/