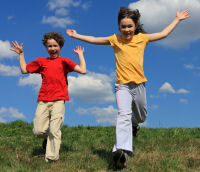 Were you proficient at Simon Says?  Did you struggle initially at Red Light,
Green Light?  How about clapping
games?  Little did I know, according to  an
excellent piece in The New York Times
Magazine by Tara Parker-Pope entitled:
“Simon Says Don’t Use Flash Cards,  “… that playing certain kinds of childhood games may be the
best way to increase a child’s ability to do well in school. Variations on
games like Freeze Tag and Simon Says… [test] a child’s ability to pay attention,
remember rules and exhibit self-control — qualities that also predict academic
success.”

The article points to
research showing that children who are good at Simon Says tend to “…like games
do better in math and reading.”  Another
points to an Oregon State study that finds that the “…a

child’s ability at age
4 to pay attention and complete a task, the very skills learned in game play,
were the greatest predictors of whether he or she finished college by age 25.”

Though I always like to
see games recognized as a major factor in brain development, I am a bit
concerned that we not focus too much on the pragmatic function of play.  We don’t want to have parents worriedly
watching their children play tag or hiring a Simon Says coach.  Kids have enough pressure.

The true wonder of games
like these is that they are ancient gifts passed down from ancestors long
forgotten in the mists of time.  Yes,
children hundreds and maybe thousands of years ago developed these games not
because they were educational but because they were fun…and maybe they started
the Renaissance…who knows?