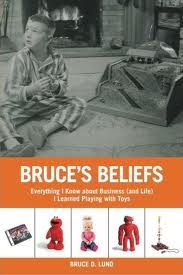 That, to me, is the ultimate message of the new book by Bruce
Lund, one of the toy industry’s top inventors.
Titled “Bruce’s Beliefs” (subtitled “Everything I know about Business
(and Life) I Learned Playing with Toys.”)
the book is filled with a philosophy about living the well lived life.

Having said that, here is some full disclosure, Bruce Lund
is my friend.  I like Bruce Lund and find
him to be incredibly talented and extremely intelligent.  Also, Bruce writes for this magazine.

So, take it for granted that I was going to like this book
going in.  It has a lot to say that is
extremely cogent (not all of which I agree with but all of which I respect).   Rather than focus on content, I will let
others do that, I want to focus a little on Bruce and why the life he lives
forms the message of this book.

Bruce is a powerful doer.
Bruce doesn’t just ride a motorcycle, he is, in two week increments,
riding it across and around America (he has plans to ride from the tip of
Alaska to the bottom of South America.)
Bruce sky dives, he roller skates, he scuba dives and, I think most
importantly, he gives to the community.
Bruce was in 2009 given the TAGIE Humanitarian Award at the Toy and Game
Inventor of the Year banquet

So, as you read Bruce’s book, remember that, as William
James the philosopher also noted, there is no belief without action.  Bruce lives his beliefs.  That, to me, is his book’s ultimate message.