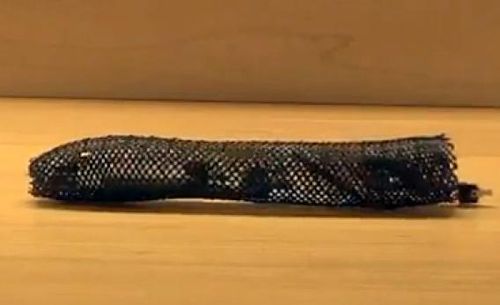 In my last posting, "Toys of the Future; the Worm and Octopus Robots," I wrote about the new robot octopus that is being developed by Harvard and the Pentagon. I thought it might make for a great toy in a few years.

Now, let's consider the robot worm.  According to a CNET article, “Robot worm laughs off your attempts to squash it dead,” a
consortium of universities (Harvard University, MIT, and Seoul National
University) working with the aforesaid DARPA,  have cooperated in developing the “Meshworm,”  “a squishy, slug like droid that stretches and
squeezes its artificial muscles to move forward. This peristalsis is similar to
how worms travel and how your guts move food around.”

According to CNET, it’s
essentially “an artificial muscle made up of a polymer mesh tube wrapped with
nickel-titanium wire. It runs on an internal battery and circuit board.”  It can be used for military purposes.  I guess it crawls up and spies on you; fairly
creepy…but cool.

Check out the video.