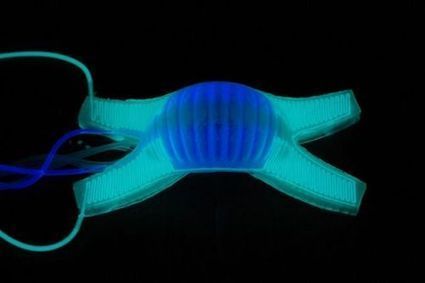 As you know, I am a big believer in “Moore’s Echo,” the
law that states whatever is cutting edge technology will be a toy in 7 years (and
I think it’s down to 3). For that reason, I like to keep on the lookout for
candidates for toys of the future.  For
that reason, I suggest that you check out the Worm and Octopus Robots.

The Octopus Robot stems from collaboration between the
Pentagon and Harvard University (quite a combination).  Here is how CBS News describes it in an
online article entitled: “Soft, squishy octopus robot with built-in camouflage”:

If you think all robots have
to be clanking, metal machines, think again. According to the Pentagon and
Harvard University, the future of robotics may be soft and squishy. The two
organizations have collaborated on a new generation of tiny robots that are
cheap, soft and vaguely octopus-like. They also have built-in camouflage.

It’s made of silicon and has “microfluidic” channels; in
other words if you cut it, it bleeds.  It’s
still in the prototype stage but here is a video released by Defense of
Advanced Research Projects Agency (DARPA).

In my next posting, we look at the “Meshworm,” the robot
worm.