Three years ago, two pals from Brooklyn came up with the idea of creating a desktop toy out of powerful magnets. Their creation, Buckyballs, became an instant hit. And by this year, the two — Craig Zucker and Jake Bronstein — had expected annual sales to reach about $25 million…

Though the product is marketed to adults and festooned with warning labels, regulators have moved to stop sales because children keep swallowing Buckyballs and similar products made by others.

The above quote is from a New York Times article by Andrew Martin entitled, “For Buckyballs Toys, Child Safety Is a Growing Issue.”  The question it raises is this:  Should a toy, meant for adult use, be pulled off the market because children might misuse it?  That’s the question that Bucky Balls, a company that makes magnetic desk top toys for adults, is facing. 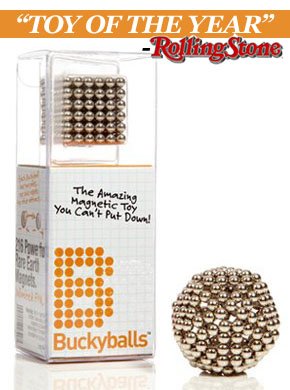 As we are all only too aware, the toy industry experienced major recalls and a safety disaster when in 2006 it was discovered that rare earth magnet construction toys were coming apart, allowing children to swallow the components.  The magnets, when ingested, are so strong that they can cause the intestines to adhere and create blockages; the result being visits to the hospital and even death.

The toy companies in question changed the  way the products were engineered  and the issue was put to rest…at least at the time.  Now, the CPSC sees such a risk from rare earth magnets in adult toys that it has issued an administrative complaint.

[The]  administrative complaint filed last month by the Consumer Product Safety Commission seeks to require the company…to tell the public about the problem and offer customers a refund. The safety commission also asked 12 other manufacturers of rare-earth magnets to voluntarily recall their products and stop sales; 11 have complied.

Recourse to an “administrative complaint,” forcing a company to recall products is, according to the article, rare.  The case will be brought before an administrative law judge.

The safety commission and consumer advocates maintain that the ban is warranted because rare-earth magnets are irresistible to children, even if the packaging says the toys are intended for adults. In the past, the commission has banned toys that it deemed too dangerous, like lawn darts

Since 2009, the CPSC reports 1700 cases of children visiting emergency rooms due to the swallowing of rare earth magnets.  According to the article, the number of Bucky Ball related incidents is unknown.

We all want children to be safe but this issue does raise some serious questions about the free market::

Zucker points out that “… the safety commission has not banned many other products that cause far more injuries, and even deaths, to children, including all-terrain vehicles, button-cell batteries and window blinds.”  Not to mention fireworks, matches and bug poison.

So, where and how do we draw the line?  What do you think?