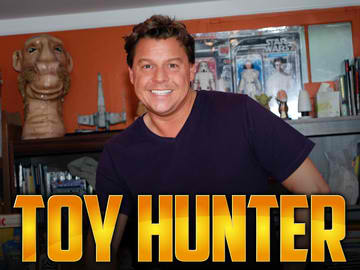 Several of you have been kind enough to alert me to the new Toy Hunter show.  The Toy Hunter is a production of the Travel Channel and is part of a genre of shows in which experts visit people’s homes in search of antique and just plain old items that they can resell.

The Toy Hunter, at least initially, seems to be focusing on toys from the 70’s and 80’s.  The idea being that those who watch will be fascinated by rediscovering the toys of their youth.  I am sure that there is many an individual sitting in their living room and saying, “Damn, I had one of those and my mother sold it at a yard sale.”

I like this kind of show and have been an Antiques Road Show fan for years.  I also, (ahem), am interested in toys.  Because of that, it is difficult for me to judge how good the show is.

I did some research and found that the critics seem to be lukewarm.  At least that’s according to a website called Metacritic.  Metacritic is a bit like the movie critic website Rotten Tomatoes in that it aggregates reviews, gives them a point value and then summarizes how good a particular television show is based upon the average number

The Toy Hunter received a Metascore of 47 out of 100 possible points for the first show.  Let me caution that only five critics weighed in although they included the influential New York Times, Boston Herald, Newsday and New York Daily News.

The consensus was that it just wasn’t interesting enough.  The problem seems to be that the show gives us too much information that we already have.  That plus its focus on more recent history makes for less than compelling watching.

But how does Toy Hunter’s metascore compare with other shows?  Here are some examples:

Let’s hope that the show picks up steam because any show that puts toys in a positive light is good is good for anyone in the business of play.  Let’s definitively stay tuned.