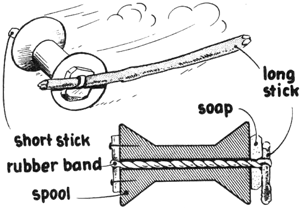 I chanced upon an article entitled “Games You Made Up When You Were a Kid.”  It was fun to read about his memories of “Kitchen Rock Bands” (pots and pans make for some great percussion); “Erupting Volcanos” (pretending the floor is covered in lava and you can only move around by jumping from couch to chair to bench) or cardboard roll sword fights (works with wrapping paper cores and you can do short swords out of paper towel rolls). 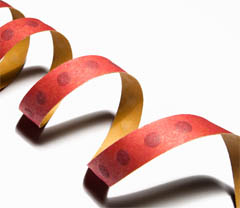 As I read it I began to think of the toys I used to make.  There was the cannon that actually fired a piece of pencil lead across the room.  I made it out of a metal ball point pen, some rolled up caps (we cut out the gun powder part and rolld it up), a broken pencil lead and a match.  It worked and we never, amazingly, set ourselves on fire or shot ourselves in the eye.

On another occasion I remember using an empty thread spool, a crayon, a rubber band and a pencil to make a rolling tank.  You just turned the pencil until it was fully wound, put it on the floor and let it go.  I can remember it moving all the way across the length of the kitchen floor.

There was also a rocket some big kids up the street made out of aluminum foil and a bunch of matches (big kids sure could do a lot of cool stuff).   Now that I look back, fire was instrumental in a number of these toys.  No one’s parents seemed concerned.

them.  Probably older children taught younger ones, much as jump rope chants have been passed down (until now as it appears that they are rapidly being forgotten).

Did you make homemade toys?  Do you now make them with your children or grandchildren?  If so, share your memories with us.