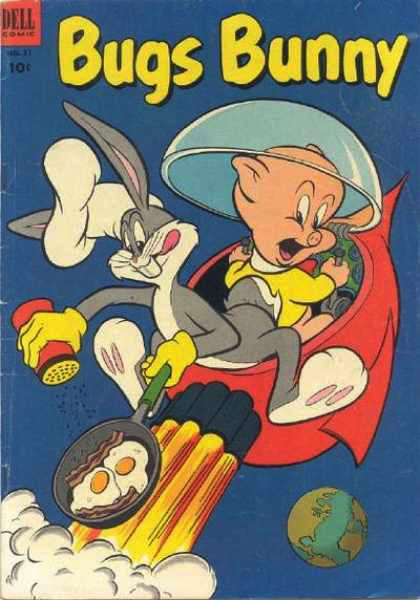 I have, since a child, been fascinated by the future.   I can even remember the day when it all started.  My much older brother kept a big box of old comic books under his bed.  Once, while browsing through a sea of Superman and Batman I chanced upon a Bugs Bunny comic book.  The cover contained a picture of Porky Pig steering a rocket ship while Bugs Bunny fried some eggs on the after burner.  Intrigued, I picked it up and was immediately immersed into the story.

Bugs and Porky had gone to visit the offices of a Science Fiction publishing company.  They wanted to know where the writers got their ideas.  It turns out that the company had a window that opened onto the future.  Porky and Bugs Bunny, being Looney Tune characters and therefor rediculously impulsive, climbed through the window and had wild adventures with space ships and ray guns. 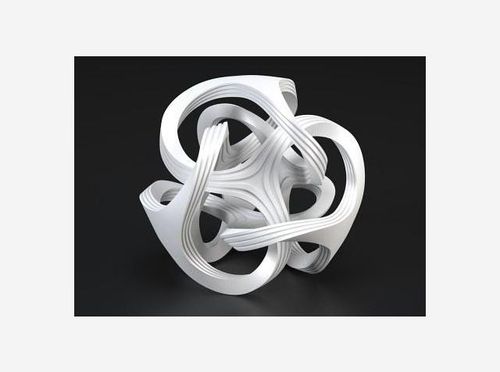 The memory is so vivid that I was able to Google a description of the cover and find it (see above).  From that day on I was hooked on wanting to live in the future; it was my dream to crawl through that same window.

Well, it felt a little like that last week when I, Gerrick Johnson and JC Jung took the elevator up to the 8th floor of a downtown building and paid a visit on to  Shapeways; a 3D printing company.

If you will recall, 3D printing is a process by which you produce a 3 dimensional object based upon a design you create or download into your computer.  Rather than ink on paper, the printer lays down thin layers of material until they finally form a finished object.  In short, just as you can print out a letter or sales sheet from your computer, with the right equipment you can print out a three dimensional object.  In fact, the newer machines even apply paint.

Our hosts at Shapeways expalined that they are able to combine powerful 3D printers with special software to provide “personalized mass production.”  If you create a design, 3D printing allows them to print it out at the same cost per unit, whether they print out one or ten thousand.  You can either have them create some inventory and ship it to you or you can sell products one at a time by letting them post your design on their website and print it out and ship it to the consumer on demand.

They gave me, as an example, someone who noticed that his luxury car was missing a coat hook.   The gentleman designed one that would fit, posted his design on the Shapeways website, and now sells four or five per day at a price of around $10.00.  There are no molds, no inventory, just atoms on a computer until you turn them into an action figure, a whistle or even a machine.

Our hosts showed us a number of products that had been created via the 3D process.  What blew us all away was that you are not limited to resin.  You can print out in porcelain, precious metals (gold, silver) and titanium.  In fact, they told me that the Navy no longer carries all spare parts on its aircraft carriers.  If they need something, they can print it out right on board.  If you think that’s wild, they are also experimenting with printing out bodily organs.

They told us that at this time, there are 150,000 active 3D designers whose designs have now been turned into over a million objects; it’s big and it’s getting bigger.

What do I make of all this?  That in my next posting…