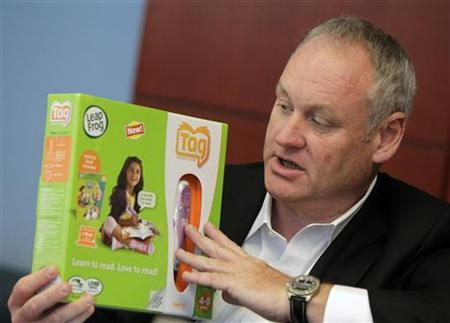 John Barbour, CEO of LeapFrog, graciously agreed to do an interview with me that turned out to be a great conversation.  John is fun to be around.  When you first meet him, three things are immediately obvious:  John has a strong Scottish brogue, a great sense of humor and an abundance of both mental and social intelligence; he dominates a room.

John, now CEO of LeapFrog, is leading a renaissance at that company.  I was intrigued, however, as to why he had returned to the toy industry.  After all, John had already finished a highly successful career in the toy industry which included the Presidency of Toys R Us, USA, International, and ToysRUs.com as well as executive stints at such notable toy companies as Hasbro, Matchbox and OddzOn Products.  Why would he choose to jump back in?

Why did John return to the toy industry?

John told me that he returned because he loves (I underlined “loves” because when he said the word he almost shouted it), not likes but loves, the toy industry, its people and its consumers.  Where else, he told me, could you have such a positive impact on children?  You can almost feel John’s adrenaline pumping as he describes his desire to turn LeapFrog into a place with a reputation of being a great place to work…and according to him; he is having fun doing it.  John’s mission:  To create a collaborative, entrepreneurial environment in which those who work at the company feel they are having a positive impact on children’s lives. 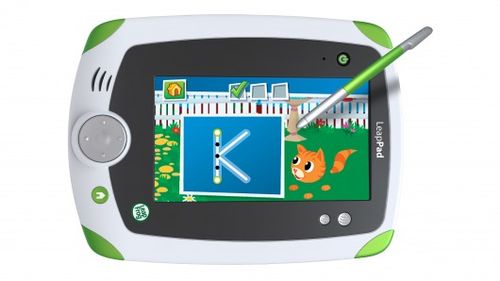 Why did he choose LeapFrog for his return?

But why LeapFrog, why not some other company?  John told me that he had met the company’s founder, Mike Wood, at its inception.  John was struck by Mike’s desire to educate through fun.  Later, while at Toys R Us, he was able to follow LeapFrog’s growth and gradual decline.  When he received the call to lead, he knew he could make a difference.  He also knew that LeapFrog had tremendous potential in a category, “Supplemental Education” that was growing.

What business is LeapFrog in?

In order to make the turnaround happen John knew he had to do was answer Peter Drucker’s famous question: “What business are you in?” Pepsi and Coke, John told me, assumed they were in the soda business.  If they had realized that they were actually in the non-alcoholic refreshment business they would not now have to purchase bottled water, energy and fruit juice companies.

So what business is LeapFrog in; it’s not the toy industry; it’s the “Educationally fortified entertainment business.”  John told me that kids get enough work while at school.  They really don’t want to come home and work some more; they want to play.  LeapFrog’s mission is to provide products that educate but are as compelling as anything else the child could be doing whether it is television, a video game, a movie or music.  In other words, LeapFrog is providing world class entertainment that is “fortified with educational nutrition.”

Who is Leapfrog’s competition?

So, if LeapFrog is in the “educationally fortified entertainment business;” who is the competition?  Is it

Mattel or Hasbro? “No,” John replied, “it is Apple, Amazon and other media and multi-platform companies.”

John’s statement brought to mind LeapPad, the company’s entry into the tablet market.  As I wrote in an earlier posting, “What I found intriguing about the LeapPad Explorer when it came out was that it really wasn’t competing with other toys. It was, in fact, taking on the Apple iPad, Motorola Xoom, Samsung Galaxy and a multitude of similar products. LeapFrog had, by their act of developing the LeapPad Explorer, entered the broader tablet market with a product that was priced at $99.”

I asked John if at least the LeapPad wasn’t actually in the technology business.  After all, look who he’s competing with.  No, he insisted, whether LeapPad is a toy or technology is moot.  What is important is that it is “educationally fortified entertainment.”  He explained that an iPad has to appeal to everyone from 1 to 100.  A LeapPad however is responsible for not only entertaining but educating kids 3 to 9 years old.  In fact, as a result of their focus, LeapFrog sold more LeapPads for use by that age group than Apple.

Parents buy a LeapPad for their children because of the good price, because of the curriculum that comes with it and because you can throw it against a wall and it still works.  In other words, LeapFrog did what Apple does best, sweats the details.

John explained that every educational product they produce or sell on their website (that includes software from companies like Hasbro, Mattel, Sesame Street and Nickelodeon) must first be  approved / curated by one of the four PhD’s they have on staff.  “The same,” he says “cannot be said for Apple.”

What did I make of my conversation with John?