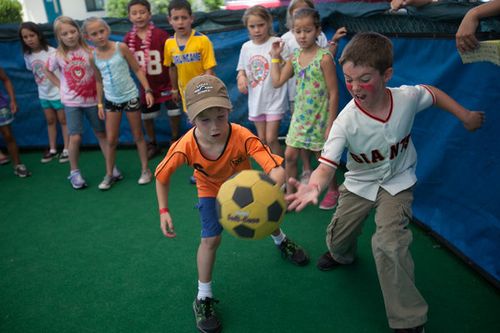 Every once in a while, while walking in New York, I pass a place called "The Gaga Center."  I had assumed that it had something to do with Lady Gaga, maybe a charitable foundation.  I had assumed wrong.  At least that was what I realized when I read a piece in The New York Times, "Jewish Camps Spawn a U.S. Playground Hit",  about a game called Ga-ga or Gaga that is sweeping the country’s youth centers.

The article, by Karen Alexander, puts it this way:   “Believed to have originated in Israel, the game — which translates to “touch, touch” in Hebrew — has been a standby of Jewish summer camps and community centers in the United States since at least the 1970s. Now, to the surprise of parents who recall the game from their youths, gaga is solidly mainstream.”

Here, according to the Wikipedia entry, is how the game is played:

Ga-ga is played in a large octagon or hexagon called the Ga-ga pit. Ga-ga begins with someone throwing the gaga ball up into the air. When it bounces the players say "Ga" each bounce for the first three bounces. After three bounces the ball is in play and the game starts. A player cannot hit the ball twice in a row unless it bounces off a wall or another person. When a player is hit, he leaves the game. A player who knocks the ball out of the pit is also out. If a player catches the ball in the air, the last person to hit the ball is out.[3]

Apparently, the game has become so popular that there is even a 23,000 square foot facility that has six Gaga pits.  This of course begs the question, is anyone out there making backyard Gaga pits?  There is a company, Sports Resource Group that makes institutional versions.  It would seem, however, that there is a business there for those who want to develop the home market.

If you are familiar with Gaga or getting into the Gaga business, please let us know.