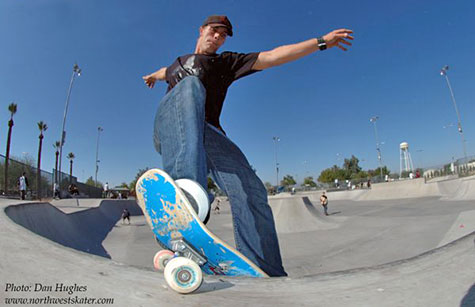 Are you familiar with the term Skate Geezer?  I hadn't until I saw a nice article in The New York Times about these people in their 50’s (mostly guys) who have returned to skate boarding.  These are people with responsible jobs, families, gray hair and all the other accoutrements of respectability.  But now, in middle age, they long for the excitement of their youth;  careening around on a skate board.

Here is how the  article by Alex Williams puts it in “Skateboarding Past a Midlife Crisis:"  “Forget the little red sports car: the new symbol for midlife crisis is the skateboard. Graying members of Generation X, and even their older brothers, are reclaiming their youth and rebellious streak by hopping back on a skate deck.”  It is there way of extending “…their adolescence until their federal prescription-drug benefit kicks in.”

These senior adolescents have made some changes, after all they have more money and less agility than they did 30 years ago.  They now ride on a longer version of the skateboard called a “longboard.”

These more comfortable 48” boards come with bigger, softer wheels so they have less of a chance of getting caught in a sidewalk crack and going head over heels.

The ride solo and they ride in packs.  And there are more of them all the time.  According to the article there are now 742,000 skateboarders over the age of 35, and almost doubling of where it was ten years ago.

Adults have probably always wanted to play.  It’s just that this generation has the guts and desire to really do it.  Go Skate Geezers.