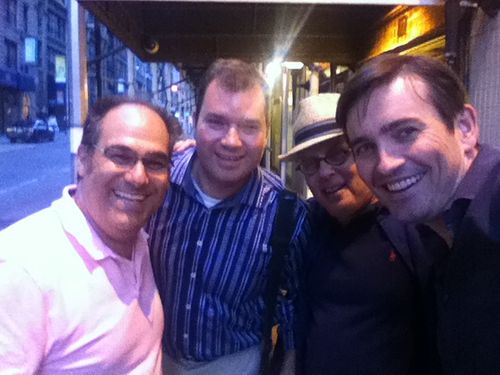 From left to right: Manuel Torres, Gerrick Johnson, me and JC Jung

We in the toy industry rarely have the opportunity to sit down with very smart people and have great conversations about what we do.  It was with that in mind that I was joined for dinner by Manuel Torres, SVP MD Global Toys, Video Games and Consumer Electronics at Nickelodeon and SVP Latin America Consumer Products at MTV Networks; Gerrick Johnson, toy industry financial analyst for BMO Capital and Jean Christian (JC) Jung, co-owner at Globe Trotoys.

We met at the venerable Keene’s Steak House where we consumed a great dinner and a few drinks (well, not a few).  We discussed everything from the rise of 3D printing to who and what's hot and not.  Adding to the flavor of the evening was the backgrounds of two of our group:  JC was born in France but lived in Africa from age 6 to 16 and has also lived in a number of European countries as well; Manuel was born in Mexico City and has lived in India and Brazil.  Gerrick and I, well, we are not so exotic.  I am from the South and Gerrick was brought up on Long Island but did go to college in North Carolina (Wake Forest).

None-the-less, everyone had a unique point of view.  The conversation was funny, smart and interesting to say the least.  The food was good too.  We are going to make it regular event and invite a special guest to join us.

By the way, Mary Couzin has started a large group in Chicago that meets on a regular basis.  Let us know if you are doing something similar.