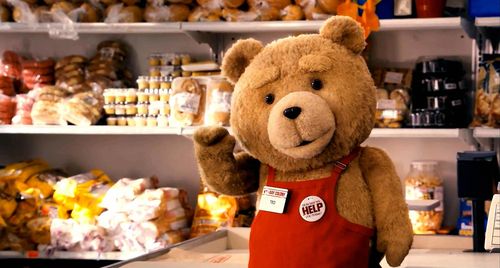 Ted, the foul mouthed bear with an oversized sex drive, is a breakout star in Seth “Family Guy” MacFarlane’s movie of the same name.  Probably not since “Greg the Bunny” has an “X” rated plush animal had such a starring role (and by the way if you like Ted and have never seen Greg the Bunny its worth watching.  Particularly their movie parodies.)

There have, of course, been animals in plays, movies and television shows before but they have not been made of fuzz and cotton.  Some  were imaginary.  Harvey the invisible rabbit who accompanies Jimmy Stewart to various bars and now resides on Broadway in a theatre revival comes to mind.

And there have been plenty of cartoon animals with foul mouths and oversized ids.  Look no further than Brian the dog on MacFarlane’s venerable “Family Guy.”  So, here is a question:  Will a toy company license the rights to Ted?  A plush Ted with a sound chip would probably be an attractive purchase to

Here is another question:  Where do you merchandise a bear like Ted?  Does he go in the toy department?

Let us know your thoughts.  And oh yes, is anyone licensing the rights to a “Fifty Shades of Grey” game?