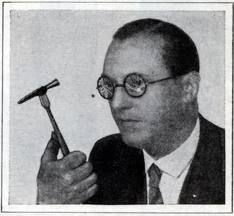 Reuben Klamer, an innovator in the use of plastic in toys, once told me that he got the idea for shatter proof plastic toys from a shampoo bottle.  It seems that in the 1960s’, manufacturers began moving away from glass to new, shatter-proof plastic containers (prior to that plastic was brittle) so that the danger of broken glass in the bathroom could be mitigated.  Reuben figured what was good for a shampoo bottle was food for a toy and began making them with shatter proof- plastic.

That was why my eye was caught by an article in the New York Times entitled:  “Wary of Plastic, and Waste, Some Consumers Turn to Glass.”  It seems that Walt Himelstein, a scientist and entrepreneur, has invented a form of glass that is break resistant and shatter-proof.  He calls it

the “Pure Glass Bottle” and it is of interest to companies as consumers become more wary of the chemicals in plastics (think phthalates).

So, wouldn’t it be interesting if at some time in the future glass became a material safe enough to use in toys?