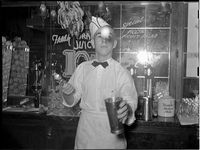 According to my mom, I cried when I finished devouring my first ice cream cone. I wailed for the duration of our bike ride home from the local ice cream shop. In response to this humbling story, I tell my mom, “who doesn’t scream for an ice cream?” The frozen treat exemplifies advances in technology and explains food as a social commodity. Plus, eating ice cream is fun.

Chefs originally dished out ice cream, consisting of costly white sugar and exotic fruits, to Renaissance Kings and courtiers. Upper-class Americans, too, first enjoyed this treat when it came to America. Those who afforded confectioners trained in sugar-craft delighted guests with ice cream desserts. Some say George Washington spent $200 on ice cream one summer and often served his guests an ounce or two of the treat in dainty porcelain cups. Advances in manufacturing soon provided opportunities for mainstream Americans to partake in the fun. In the first half of the 19th century, many used a “pot freezer” to make ice cream. This method involved embedding the pot freezer (a tin container) in ice and then beating the semi-frozen contents for at least an hour. Cooks dreaded the tedious process. By the 1840s, Nancy Johnson created a hand-cranked ice cream freezer. Chefs delighted in the new method, because it reduced physical labor and time. Some still complained. One such user even published a fictional story in Harper’s Weekly about a selfless young girl who volunteered to crank six ice cream freezers and later abandoned said task in pursuit of a romantic encounter. In 1921, The Liberty Freezer promised to completely “do away with the cumbersome preparatory work.”In retrospect, the Statue of Liberty painted on the side of the freezer seems especially fitting, because that same year, the commissioner of Ellis Island declared that all immigrants receive ice cream as part of their first meal in America. Today, families might opt to make homemade ice cream anywhere with L.L. Bean’s Ice Cream Ball. The instructions are simple: “add ice cream ingredients to the top and just shake, pass or roll the ball around your campsite.” A game of catch, followed by dessert? Play ball! When kitchen tools became more user-friendly, some preferred to frequent confectioners or ice cream parlors. In the early 1800s, these businesses boomed in cities. Guests at parties and picnics expected their host to serve ice cream in the 1920s. During prohibition, temperance leaders advocated for ice cream soda over beer and declared the ice cream parlor the wholesome social destination, rather than seedy saloons. Soon hotels converted barrooms into ice cream parlors. Today, one of my favorite parlors to frequent is right here at The Strong. A few years ago, The Strong acquired a collection of miniature rooms from the family of Ruth Rosenfeld. Ruth began assembling
miniature rooms in the mid-1970s. For her “Ice Cream Parlour,” Ruth included a bar with marble top, bent-wire chairs, glass jars filled with candies, and a banana sundae that looks good enough to eat.

Playing with ice cream and its corresponding kitchen tools is a pastime no longer left to gourmet chefs alone. In 1986, Barbie and her friends sold such “fantasy flavors” as Candy Bar and Honey Vanilla at her Ice Cream Shoppe. In 2000, Fisher Price released the pattern game Ice Cream Scoops of
Fun. Players compete to fill their cups with three flavors of ice cream and various toppings. A few years ago, Ben & Jerry’s teamed up with Stephen Colbert to create his AmeriCone Dream! Colbert was determined to out-sell Willy Nelson’s Peach Cobbler. The pair even hosted a competition on The Colbert Report. Last year, Ben & Jerry’s paired up with Jimmy Fallon to concoct his Late Night Snack. Colbert took note of his new competition and launched a duel with Fallon. Their playful banter and hilarious skits lasted nearly a year and concluded with a ballad for peace.

Whether you prefer to order vanilla or more adventurous flavors like Peanut Butter Curry, eating ice cream remains a favorite pastime. And to inspire other ice cream fans, I’d like to share a recipe originally created by the editorial staff of the 1915 trade journal The Soda Fountain and reprinted in The Strong’s 1990 book Ice Cream for All.

Pour over ice cream mixed blackberries and grated black
walnuts and top off with two whole strawberries. Or, pour over ice cream the same mixture as in the preceding, adding a little powdered cinnamon and syrup of raspberry vinegar. This sundae may also be topped with marshmallow. (In my opinion, the sundae may also be topped with chocolate chips.)