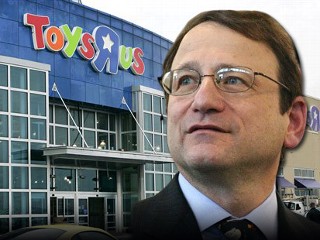 If you were to come up with a short list of the world’s most important toy industry people, you would certainly have to put Jerry Storch right at the top.  Mr. Storch became CEO and Chairman of Toys R Us in 2006.  Since taking over, he has led Toys R Us through a turbulent period of time in which the company has had to  battle its way through  worldwide  economic turmoil; strict new toy safety laws; sharp increases in the cost of toy production and the rise of Amazon as a significant toy competitor.

I asked Jerry Storch for an interview because I wanted to find out how he felt Toys R Us, the toy industry and his initiatives were doing.  He kindly accepted.  Here is part 1 of my interview.  (For a biography of Jerry Storch, see the end of this interview.)

I felt that Toys R Us had a better 2011 than the company was given credit for.  What stuck out to me was that while the toy industry at large had a 2% decline in traditional toy sales last year; Toys R Us was up 5%.  In addition, while the company got hit hard by a 9% decline in video game sales, the video game industry as a whole was down 21% in December alone.  Why do you think that your company has not gotten credit for outpacing these respective industries?

That’s a great question!  There has been continued focus by many people about when the company might or might not go public, and that has sometimes overshadowed discussion about our operating performance. Last year, we were pleased with our success in delivering our third consecutive year of Adjusted EBITDA in excess of $1 billion, and with the net earnings growth we realized in the fourth quarter.  We also continue to enhance our gross margin rate through our strategies to expand exclusive product offerings and deepen relationships with manufacturers.

Our business performance over the past six years has been remarkable by any measure, thanks to the great team we’ve developed.  We have delivered solid results, generating strong adjusted EBITDA – a 44% increase since 2005 – and increased gross margin, while making important market share gains amidst a continuing tough economic and competitive environment.

Our toy business is healthy and has been consistently up, particularly in the Core Toy and Learning categories.  We remain the leader in first-to-market offerings and ownership of hot product.  And, we continue to expand our assortment of differentiated, exclusive products to set ourselves apart from our competitors and capture market share.

At the same time, the videogame business over the past several years has been suppressing our same store sales. It is a highly cyclical business, depending heavily on releases of new gaming technology platforms which we have not seen since late 2006 and the introduction of the Nintendo Wii.  To mitigate the impact of this segment on our overall performance, we continue to make strategic adjustments with our product mix at higher margin rates.  In addition, we have a global strategic partnership with Activision for the highly successful Skylanders line.  And, we are very excited about the introduction of Nintendo’s Wii U this fall.

And, we just reported solid first quarter results for 2012, driven by strong toy sales, enhanced margin and continued expense controls.  We’re excited about the year ahead!

With the continuing rise of the Amazon and other ecommerce providers, there has been a concern that bricks and mortar retailers are unwillingly serving as showrooms for these companies.  As a company with both a strong ecommerce position and a powerful bricks and mortar presence do you feel Toys R Us is immune from some of these concerns?  In fact, does Toys R Us benefit?

We see the Internet as more of an opportunity than as a threat for retailers like Toys “R”Us with physical locations. Our global online business grew 30% in 2010 and 28% in 2011, and our e-commerce business is now a $1 billion business globally!  However, the overwhelming majority of sales still occur in physical stores.  Much of the growth on the Internet is not only coming from Internet sales, but also omnichannel paradigms.

The future belongs to brands that build the best consumer-facing network, incorporating stores, Internet, mobile, social and local components.  Customers want to shop and interact with brands when they choose and how they choose.

That is why we have been aggressive about advancing our omnichannel offerings, which allow us to leverage the strengths of our store and online businesses to create a seamless shopping experience for our customers, so they can shop with us whenever and however they want.  Buy Online, Pickup In-Store launched in time for the 2010 holiday season in all Babies“R”Us stores nationwide and Toys“R”Us stores in major U.S. markets.  In 2011, the service expanded to all Toys“R”Us stores and we added “Family and Friends Pick Up” – allowing the customer placing the order to designate a friend or family member to pick up their item – at the store of their choice.

If a store doesn’t have the particular item that a customer is looking for, our store employees can place an order from our website while the customer is in-store and, in most instances, have it shipped to the customer’s home at no charge.  Plus, to provide additional support to Toysrus.com and Babiesrus.com, last fall, the company began leveraging the inventory from Toys“R”Us and Babies“R”Us stores nationwide to help complete online orders.  This “Ship from Store” program continues to ensure rapid delivery and helps eliminate out of stock issues.

Over the past few years, we have also implemented several new advancements in our mobile technology capabilities, including the launches and updates to our dedicated Toys“R”Us and Babies“R”Us apps for iPhone, iPad or Android.  Mobile commerce is, in fact, our most rapidly growing channel.

And, we’re not done!  We continue to refine these offerings and add new ones to ensure a fully integrated shopping experience.

Part 2 of our interview with Jerry Storch will appear tomorrow.

Gerald L. Storch joined Toys“R”Us, Inc. in February 2006 as Chairman and Chief Executive Officer. In this capacity, he is responsible for leveraging the strength of the Toys“R”Us brand and positioning the global franchise for growth over the long term.

Under his leadership, the company has embraced a “Playing to Win” culture and a commitment to growing its position as THE toy and baby products authority. Mr. Storch has successfully led efforts to integrate the company’s toy and baby businesses, an initiative that has included the creation, development and execution of the Side-by-Side store concept, which combines Toys“R”Us and Babies“R”Us under one roof. He has also overseen the continued growth of the Toysrus.com e-commerce business and, in 2009, added to the company’s portfolio of online brands with the acquisitions of eToys.com, KB Toys and Toys.com. That same year, he led the company in obtaining the exclusive right to own and operate the legendary FAO Schwarz brand and its website, FAO.com. Additionally, Mr. Storch introduced the Toys“R”Us Express store concept, opening pop-up stores in malls and other shopping centers nationwide, to increase the company’s toy-selling footprint during the important holiday shopping season.

Mr. Storch has led the company in its strategic focus to provide customers with a differentiated product assortment working with branded manufacturers and by building upon its own exclusive brands business. He has also made international growth a key part of the company’s overall business strategy, acquiring a majority stake in its previously licensed business in Southeast Asia and Greater China and opening its first store in Poland in 2011.

A retail veteran with more than 22 years of experience, Mr. Storch is an industry leader and respected advocate for children’s safety. He has called for the harmonization of product safety standards around the world and internally established the Toys“R”Us Global Product Safety Policy Committee and Product Safety Response Team with responsibility for staying ahead of emerging product safety issues and responding to them with urgency. In addition, he has mandated strict, industry-leading product safety standards for all products sold in “R”Us stores worldwide.

Prior to joining Toys“R”Us, Inc., Mr. Storch served as Vice Chairman of Target Corporation.  He joined Target in 1993 as Senior Vice President of Strategy and served in roles of increasing seniority over the next 12 years. While at Target, his broad responsibilities included overall strategy, supply chain, the Target.com business, technology services, financial services, guest relationship management and market research, the six sigma program and mergers and acquisitions.  He was also instrumental in developing the Super Target concept and growing the company’s grocery business. Additionally, Mr. Storch was involved in developing strategies and overseeing execution for Target Corporation’s department store portfolio, including leading the turnaround at Marshall Field’s and the subsequent sales of Marshall Field’s and Mervyn’s. Prior to joining Target, Mr. Storch was a partner at McKinsey & Company, specializing in retail and financial services.

Mr. Storch holds a bachelor’s, a Juris Doctor and a Masters of Business Administration from Harvard University. He serves on the Board of Directors for Toys“R”Us, Inc. and Toys“R”Us-Delaware, Inc., as well as the Toys“R”Us Children’s Fund.  Mr. Storch is also an active member of the Committee Encouraging Corporate Philanthropy (CECP). In 2008, Mr. Storch was honored by the New York Society for the Prevention of Cruelty to Children (NYSPCC) for his work helping children in need. He is also a committee member of the International Council of Toy Industries (ICTI). In addition, in January 2012, he was elected to the Board of Directors of the Bristol-Myers Squibb Company, a global biopharmaceutical company, where he serves as a member of the Audit Committee and the Compensation and Management Development Committee.

Mr. Storch and his wife Jacquie have five children.