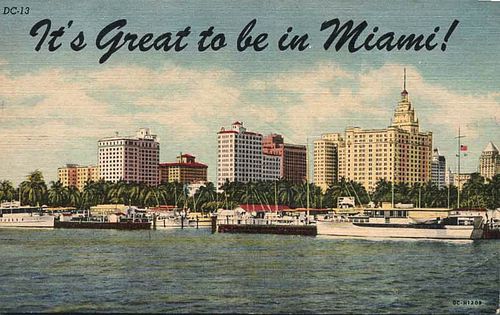 I have to admit that for me, Miami has always been the place where people went in the winter to get away from the cold.  I, however, have had to change my perception.  Miami, it appears, is an economic powerhouse.

While in Brazil and since, I have spoken with several toy industry people from South America who have referred to Miami as the economic capital of South America.  It is appears that this city, at times most noted for retired New Yorkers; expatriate Cubans; Don Johnson and the song “Moon Over Miami” is emerging as a place that we all need to know a lot more about.

That came to mind as I read about the new free trade agreement between the United States and Columbia.  The Miami Herald, in a piece entitled “U.S.-Colombia Free Trade Agreement goes into effect,” notes that “South Florida is expected to be a big beneficiary.  Colombia is the region’s second-largest trading partner with $8.3 billion in total trade last year …” It is estimated that “… the deal will create 6,400 jobs annually in Florida and increase Florida-origin exports by 13.8 percent.”

“Magic City”).  The article goes on to state:  “According to a 2009 UBS study of 73 world cities, Miami was ranked as the richest city in the United States, and the world's fifth-richest city in terms of purchasing power.”  Really; I had no idea, did you?

It looks like all of us in the toy industry need to be more conscious of Miami, South America, the Caribbean as well as Central America and consider whether we should be thinking a little more north south along with east west.