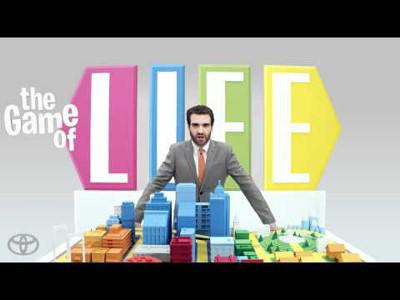 Have you seen those commercials for Toyota’s “City’ car?  They use Hasbro’s “Game of Life” for a multi-platform advertising campaign to sell the Toyota’s cars.   Created by the Saatchi advertising firm, the ads include not only a pair of TV spots but a presence on YouTube, Pandora, Hulu and others. There is more to come.

Those in the business of traditional toys and games may want to know why Saatchi chose a classic board game rather than virtual games like “Farmville” or “Angry Birds” to drive the campaign.  There may be an answer in a piece written for Advertising Age by Stephen Williams entitled:  “Toyota Makes Game Out of Buying a Prius.”  Here is how Williams puts it:

While some may associate board games like Life with an older generation, Toyota finds it a good fit with digital-savvy millennials. "Our research showed that our target group of ages 25 to 35 views life as a game…not fun and frivolous, but purposeful," said Sara Bamossy, strategic planning director for the Saatchi office… Ms. Bamossy said the agency found that many in the target demographic grew up playing the board game and that [real] life for them is a constant media stream of information, but they love social games, they might invent a game at work, and it bonds them together."

Isn’t it interesting that a generation that grew up with the Internet is a good fit with table top play.

Isn’t it also interesting that Reuben Klamer, who invented “Game of Life” in 1960, was able to capture something in his game that still resonates with people 52 years later?

Maybe we need to study “Game of Life” to see what continues to make it so relevant.

Reuben is still an active inventor and a friend of mine so I sent this article to him before posting it and here is how he responded:

The Toyota/Prius commercial featuring the amazing display of The Game of Life is one of the greatest examples of wall-to-wall TV advertising coverage. It is an obvious blitz directed towards their 78M strong Millennial target, using fun and play as a base.

My phone kept ringing off the hook with calls from friends and relatives across the USA: Ohio, Florida, New York, North Carolina, New Jersey, Texas, etc. I have never witnessed more excitement about The Game of Life. SELL ON LIFE…and TOYOTA PRIUS!

And on behalf of the toy community may I respond by saying: INVENT ON REUBEN KLAMER…INVENT ON!