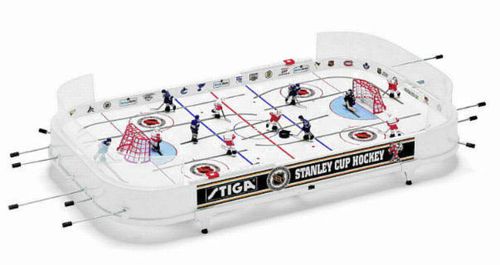 I love table top hockey.  It’s the game where you pull and turn rods so that the hockey players move and spin and hopefully score by shooting miniature pucks.  It takes terrific fine motor coordination and can be highly competitive.  I am proud to say that at one time I was prettttttttttttttttttty good.  I would get out my Stiga Hockey set, sit it on the floor or table, and facing my over-eager and soon to be nonplussed opponent, spend hours moving the puck back and forth and getting it into position for my “famous” slap shot.

It seemed like the game had disappeared as I saw it less and less in stores and homes.  Fortunately for me and other enthusiasts, table top hockey appears to be making a comeback

According to a Wall Street Journal article by Will Connors, “Table Hockey, on Ice Since Heyday in 1970s, Makes a Comeback:”   “Across the U.S. and Canada, a resurgence of table hockey is under way, drawing younger players and women to a sport that has long been the domain of older men in their basements reliving a game that hasn't been popular since they were kids.”

What is causing people to once again embrace the game?  It seems that they are being drawn by  “… the sport's retro feel—a throwback to the 1970s—in much the way pinball machines and horseshoes stage comebacks from time to time.”

I think that there is another aspect to the renewed interest.  Virtual play is largely two dimensional

(sight and sound).  Table top hockey, like other mechanical games, appeals to all five senses.  I think it is the appeal to all the senses (something that at least for now only traditional toys can do) that makes the difference.

So, if you have some mechanical games you want to bring back or refresh, it may be a good time to do so.  Do you know of some “old school” games that deserve a comeback?  If so, let us know.

Also, if you have experience playing with the different brands (Stiga or Voit) or are familiar with other manufacturers let us know that as well.