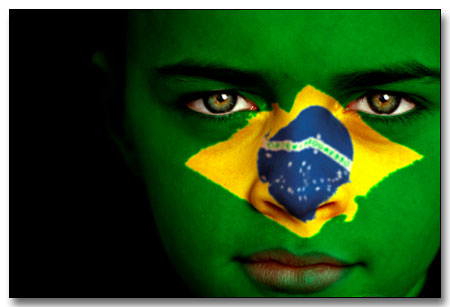 Last night was the grand opening of ABRIN, the Brazilian Toy Fair.  I and a thousand other guests attended the opening night party.   As I walked to my table I noted that it (and every table in the room) held a bottle of Scotch, a bottle of Champagne and a bottle of Wine.  It was obvious:  “Brazilians really know how to have a party.”

There were the usual speeches of welcome and the recognition of companies and people.  The language was Portuguese but the interaction was familiar enough that no translation was needed.

As I looked around the room, I took in the fact that I was in the heart of a thriving Brazilian toy

industry.  People were relaxed and happy and easy with each other.  This was a group that seemed to feel good about itself and to like each other.

And I felt right at home.  Perhaps it was the way people smiled; the way they expressed themselves and the way they moved their bodies reminded me of home.  Maybe its because Brazil, like the United States is a multi-cultural nation of immigrants.

Or maybe it is because Brazil is a confident nation.  Their economy is strong and the future looks bright.  Maybe that was why so many people were smiling.

Whatever the reason, it all seemed familiar and fun.