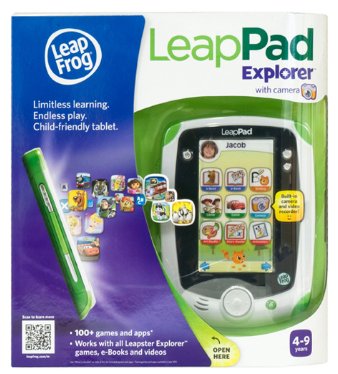 What I found intriguing about the LeapPad Explorer when it came out was that it really wasn’t competing with other toys.  It was, in fact, taking on the Apple iPad, Motorola Xoom, Samsung Galaxy and a multitude of similar products.  LeapFrog had, by their act of developing the LeapPad Explorer, entered the broader tablet market with a product that was priced at $99.

They were in essence competing for that parent who was letting their child play with their expensive iPad and worrying about it.  I thought it was a brilliant stroke and still do. As Gerrick Johnson, toy industry analysis for BMO Capital Markets put in his latest report on LeapFrog:  “The LeapPad Learning Tablet continues to be in strong demand. It is rare for us to see a hot product from the holiday season continue to sell out at retail in January, February, and March.  But based on our observations, we think this is exactly what is happening with the LeapPad.”

It appears, however, that others are getting into the act.  At least that was my takeaway from a New

York Times article by Warren Buckleitner entitled “Tablets for Children Including Apps.”  The article focuses on android touch-screen tablets that are designed for children.

There is, for example, Nabi by Fuhu which sells for $200, can be customized and is designed so that parent and child can both use it independently (the parent gets a password and  “[w]hen in Mommy Mode, Nabi becomes a fully functional tablet with a front-facing camera”).  There is also a tablet “[f]or the parents worried about germs, PlayBase Plus by Kurma ($190) has an antibacterial screen coating and a “medical grade” silicone cover.”

The article lists about eight products.  Some are familiar in the toy space and others are not.  Check them all out by clicking here and get a good sense for how toys and consumer products are continuing to converge.