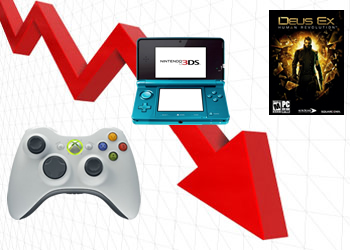 This is the second in a two part series about the recently released results of Toys "R" Us's 2011 4th quarter (click here for part 1).  Rather than dwell on those parts of the report upon which financial analysts focus, I am concentrating on aspects that are relevant to all of us in the toy industry.

We can all remember a few years ago when Toys “R” Us benefited from strong video game sales.  Not this year.  According to the Toys “R” Us press release:  “The net sales downturn was primarily due to a 9% decline in electronics, video game hardware and software.

It is interesting to compare the Toys R Us results with the entire video game industry.  According to NPD “…total industry sales plummeted to $3.99 billion, down 21% from $5.07 billion in December 2010.”  Annual sales for the industry were down 9%.

Obviously, Toys “R” Us suffered from the general malaise in the segment.  Video games and other

So, if you back out video game sales how did Toys R Us do with traditional toys?  Actually, not bad; according to the release:  “The Learning and Core Toy categories were the strongest, generating net sales growth of 5.0% and 4.3%” According to NPD, toy sales were down2% for the year.”  Compare that to total toy industry sales which, again according to NPD, were off 2% and you see that Toys R Us did pretty well as a traditional toy merchant.

So, what can we learn from these results.  One lesson may be that the more the toy segment relies on non-traditional toy products like video games (apps and whatever else is coming) the more volatile the results.  The traditional toy industry is simply not used to big annual swings. The other is that traditional toys are a safe harbor for purveyors of toys.  If you move to far from the basics, you stand to experience big highs but also big lows.

As the traditional toy industry becomes more involved with new technologies we may see an increase in volatility and that may mean we all will need to take Dramamine.  We have been buffered when it comes to the ups and downs of economic life; not any more.  Just ask Toys “R” Us.