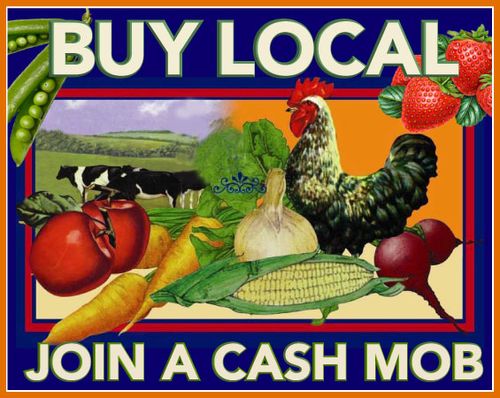 Back in December, 2011 I wrote a piece on the “Cash Mob” phenomenon (“Cash Mobs; a new way to promote local retailers”).  “Cash Mobs,” as you will recall, are a bit like “Flash Mobs” except that they have an economic purpose:  To help local retailers.

Here is how “Cash Mobs” work:  The organizer chooses a local retailer he or she wants to help.  They alert the targeted retailer and then use social networks to let participants know the location of the store and the exact time to show up.  Then, at the appointed moment everyone shows up, buys something and then goes off to have a drink.  The result is business for the store and frees public relations.  What do the participants get out of it; new friends, a lot of fun and the feeling of helping their community?

I wanted to see if the phenomenon was continuing and I am pleased to report that it is.  In fact it is spreading.  Inc. magazine in an article entitled “A Good Kind of Mob,” reports goings on in Los Angeles, Buffalo and Cleveland.  Here is a great quote from the article that not only gives the nuts and bolts of putting on a “Cash Mob” but the emotion and energy as well:

Chris Smith, an engineer at Oracle, started the first cash mob in Buffalo last September. "I thought, a lot of businesses in Buffalo have some significant economic challenges, and they deserve an investment back from the community," Smith says. He organizes a cash mob once a month, choosing the businesses based on votes he receives via his blog and social-media accounts. In January, about 75 people mobbed Chow Chocolat, a local chocolate shop, and bought nearly $1,600 worth of sweets, according to Smith. Cash mob organizers let the businesses know they are coming, but sometimes it's still a scramble. Chow Chocolat's owner, Scott Wisz, says he had only 48 hours to make "a whole lot of chocolate."

Sounds like a lot of fun and a very good thing for the local retailer.  Have you been the target of or participated in a Cash Mob?  If so, please let us know.