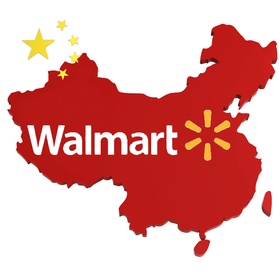 This just in from USA Today, Wal-Mart has decided to purhcase controlling interest in, Yihaodian, one of China's fastest growing on line retailers.  According to the article entitled, "Wa-Mart Takes Controlling Stake of Chinese Retail Website," Yihaodian sells more than 180,000 products, including groceries, electronics and apparel. It has expanded rapidly since it was founded in July 2008. It has 5,400 employees and a next-day delivery network across Shanghai, Beijing, Guangzhou, Wuhan and Chengdu."

Why the move into China?  "Wal-Mart eCommerce executive Neil Ashe said the deal improves Wal-Mart's access to Chinese consumers who use smartphones and social media to shop."

We have been talking a great deal about he opportunities in the Chinese domestic market (see "China Ready Limited" and "Entering the Chinese Market") so I am not completely surprised by Wal-Mart's move.  What did strike me is that Wal-Mart sees not only consumer growth in China but particulalry smartphone based growth.  What also struck me was the choice of cities.  Anyone attempting to enter the Chinese consumer market should consider focusing on these locations as these are obviously the cities where Yihaodian sees the population density and spending power necessary to be profitable.

Keep an eye on China.  Its happening fast.