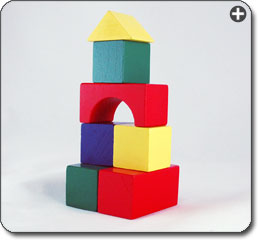 Lego doesn’t just dominate the construction toy section; it dominates the conversation about the entire category.  That’s why it was interesting to read a piece a New York Times article about the resurgence of traditional wooden blocks.

The article by Kyle Spencer, entitled “With Blocks Educators Go Back to Basics,” describes “…a renewed faith in unit blocks — those basic, indestructible wooden toys creaed in the early 1900s…” The article uses terms like “block artists, “block consultants,” “block centers,” and block labs,” to describe the elements of what one educator describes as an educational “religion around blocks.”

Now that the schools are getting the “religion” so are toy companies.  It appears that “…Becker and Lakeshore added more than a dozen block-related products to their catalog this year.”

But why the almost fanatical interest in an old favorite?  Well it appears that some believe “blocks

can build the 21st-century skills essential to success in corporate America.”  Who would have thought that those simple wooden blocks once scattered across pre-Lego America were the stuff of what great minds were made?

Lest you make light of this new found interest, know that at the Chapin School in New York, “educators have spent the last several years weaving a comprehensive block program into kindergarten and first-grade math and social studies.”

The good news for wooden block companies is that this is the front edge of the phenomenon.  It will spread and work its way through the country so if you are a retailer, add some block sku’s. It could pay off.