If you have been following our Changing the Way We Play series with the creatives at Kunoichi, we began with Brian Torney's article, Star Wars Collectables (1977),  Sam Well's article, He-Man and the Masters of the 30 Minute Toy Commercial, and Anna van Slee's article Using Social Media Thinking to Advance Board Game Mechanics. Our last in the series is Paige Bailey's Changing The Way We Play – the Xbox 360 Kinect. 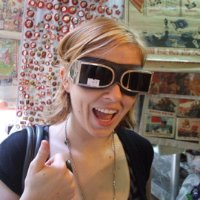 Paige Bailey is a senior creative manager and big ideas thinker at Kunoichi, a leading creative services provider in kids entertainment, toys, and games. With a background in writing and marketing, Paige seeks to build worlds behind every concept, and knock down all obstacles in between.

Paige: Normally, I’m not one to get excited about gaming console systems, but after playing the Xbox 360’s Kinect, it only took about .25 seconds to want one and about one day to make my purchase. After hours and hours of play (research), I’m ready to talk about how the Kinect has the potential to be a major stepping-stone in advancing the way we play, and how it’s opened up some virtual doors I never knew existed.

It seems I’m not the only one excited, as Microsoft’s release of the Kinect motion sensor for the Xbox

360 gaming console received strong initial commercial success, and continued to rise in sales above all other game systems in 2011. Securing a place in the Guinness Book of World Records as the fastest-selling consumer electronic device of all time, the popularity of the Kinect’s new technology seems to be exciting everyone.

The first of its kind, and sure not to be the last, the Kinect sensor challenges the way we are used to playing video games. Unlike the Nintendo Wii or PS3 Move, the Kinect doesn’t require a controller for its games. Instead YOU are the controller, navigating menus – in place of pressing A for jump, you jump. Your movements become the avatar movements on screen, opening the doors wide for games centering on exercise, dance, training, and the more traditional first person shooter/fighter.

The Kinect is a separate device, hooked up to your Xbox 360 and positioned in front of your television, facing the user. Much like a robot, when the Kinect sensor detects a human (or animal) presence, it moves up and down to get a full body shot. The camera uses invisible infrared lights to measure and mimic your movements, plus it can recognize your face and voice in a crowd of your friends. Though it has yet to recognize that my dog is just walking through the room, not actually wanting to take part in the gaming experience.

For the future, I am interested to see where this more advanced hand-eye coordination technology leads, even beyond the gaming world. Students at the University of Washington Biorobotics Lab have already begun using the Kinect for their research in robotic surgery. In the last year, a whole community of Kinect hackers has surfaced online. Hackers around the world use the Kinect for everything from a grocery cart that follows disabled customers to Tesla coil manipulation to immersive ad installations. Each day, more hacks are invented, some look back to areas like manipulating classic games to fit the Kinect; others look forward, with virtual dance parties, something I am personally anticipating with long distance friends and family.

Here’s a look at some of the exciting new game releases that came out in 2012:

– Take your kids to Disneyland at half the cost with the new Disneyland Adventure Game. This family friendly game lets you explore the Disneyland theme park, interact with your favorite characters, even fly with Peter Pan and fight the menacing Captain Hook.

- Sesame Street’s new game, Once Upon A Monster, lets your child walk through a storybook, playing and learning with cute monster characters. This game is easily one of the top reasons to envy children this year (as if you needed a reason).

– Star Wars is sure to be a popular Kinect game this season, with all new game play involving flying awesome vehicles, fighting storm troopers, and wielding your own light saber. How sweet is that?

- Dance Central 2 is the next version of one of the top-rated games developed for the Kinect and the first game that lulled me into buying the console and sensor. Menu navigation is sleek, dance moves classic and the calorie counter is an added bonus. I never imagined I could feel so connected to a Lady Gaga song.

While classic gamers may have a hard time adjusting to the Kinect, most users quickly pick up the controls. The Kinect could soon become as natural and intuitive to play with as an iPad’s touch screen. In the same way Apple users try to use every digital screen as a touch screen now, the Kinect could change our perception of gaming, adding in a very physical element. Kids will be jumping in front of televisions, waving their hands to turn them on, using a swiping motion in the air to change the channel.

With the Kinect technology, there is the potential that video games could be used outdoors, pushing both kids and adults to get active and out of the house. A sports team could train and work out together from different, remote locations. A teacher could visit a museum with her class to give students a hands-on experience. Family board game night suddenly turns into family laser tag night. Augmented reality just got even cooler.

Kinect shows us the future of gaming is strengthening through innovation, and the video games we

know and love today could soon change to incorporate new tech. I am excited to see more exercise and sports games, and expect a new, abstract game, with gameplay developed just for the Kinect, is just around the corner.

This new gaming experience not only changes what we play, but how we play it. It brings the video game world into your physical being without the disconnect of controller and screen. Like a scene out of Tron, the immersion of the Kinect extends the limits of virtual reality and how deep into the Matrix we can go.