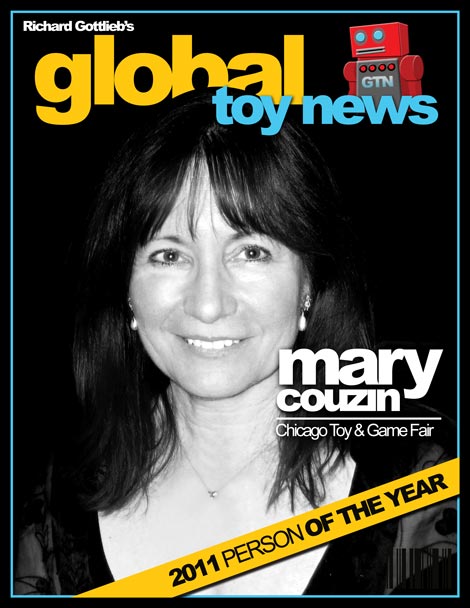 2011 inaugurates the first annual awarding of the “Global Toy News Person of the Year”.  This award will be given to the person who has done the most over the last year to make the greater toy industry a stronger, more enjoyable and far more prosperous place to work.

This year’s winner is Mary Couzin, President and Founder of the Chicago Toy and Game Group.  Mary has created a series of toy industry events in November that have provided the platform for the creation of new intellectual property, additional profits and revenue for an industry that has badly needed it.  Mary (with some help from her friends) has for the most part achieved this all on her own.

Mary’s work in 2011 has been the culmination, but by no means the end, of years of labor.  Mary began her efforts in 2003 with the creation of the Chicago Toy and Game Fair which this year drew over 20,000 people.  Its purpose is to create a venue in which toy manufacturers can, without having to filter through retailers, get to meet their consumers face to face.  By doing so, they are able to experience what has turned out to be one huge focus group.

In addition, the event affords an opportunity for consumers to meet the inventors who create the toys and games they have grown to love.  As a result, Mary has created a happening in which inventors have star status and manufacturers learn how to make better products.  Visited by thousands each year, this event has helped create new jobs, new stars and a great deal of additional revenue.

Part of the ChiTAG Fair is the Young Inventor Challenge, a chance for children to invent toys and games and show them to the public as well as the toy and game industry. This year there were over 150 children from the United States and abroad. The senior category winner this year received licensing agreement from a toy company.

Mary didn’t stop there and in 2008 inaugurated T&G Inventor Con (The Toy & Game Inventor Conference with Social Media at Play and the Inventor Summit).  This year, drawing over 250 attendees from all over the world, these events bring industry people, bloggers, the media, and most important of all, aspiring toy and game inventors, together in one place at tone time.   Most important of all, new inventors have been “discovered” and the industry has benefited with new sources of great products.

This year saw the addition of The Toy & Game Professional Inventor Summit.  This event allows established inventors to meet with toy and game companies and show their new creations in a secure and convenient environment.  In turn, it allows companies to present inventors with their ‘wish lists.’  This is great for both the inventors and the companies as it is time efficient and saves travel costs.  Even more importantly, inventors can’t get everywhere so toy companies get to look at new concepts they may never have seen.  Some feel that this may actually turn out to be Mary’s most important contribution.

2008 was a big year for Mary as she also established the TAGIE awards which have become one of the two most glittering nights of the year for the toy industry. This year, over 450 industry members gathered to honor toy and game inventors for their lifetime work as well as today’s rising stars.

In addition to her Chicago events, Mary puts on one of Toy Fair’s biggest (and most interesting) parties each year.  Try getting five hundred drunken toy inventors and their friends in one room at one time and you will see what I mean.

Sometimes amusing, other times a muse, and always a friend to the industry, this year’s Global Toy News Toy Industry Person of the Year Award is richly deserved by Mary Couzin who continues to make this industry a better and richer place to work.